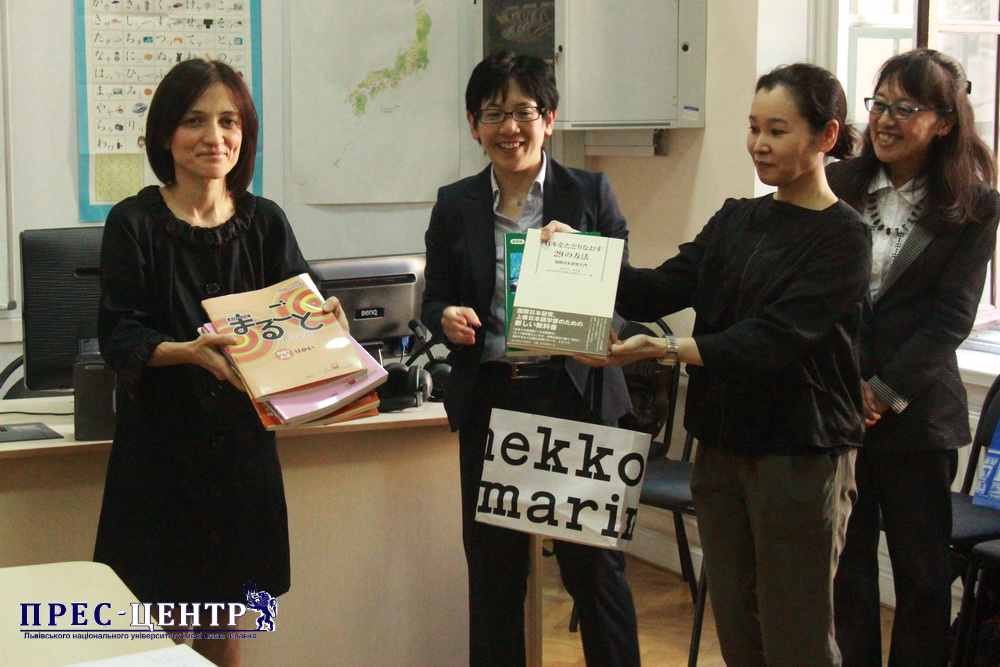 The ceremonial opening of the representation of the Tokyo University of Foreign Studies “Global Japan Office” took place at Ivan Franko National University of Lviv on September 14, 2017. The representative office is situated in room 121a of the main building of the University and will serve as a springboard for deepening cooperation between Ukraine and Japan.

The representative of the Japanese side, Professor Emiko Hayatsu, emphasized that the University of Lviv is one of the oldest and best universities in Ukraine, and therefore can become the basis for the development of Japanese studies in Ukraine.

“The opening of the representative office of our University in Lviv University gives hope for further deepening of scientific and educational contacts between Ukraine and Japan. Through the activities of our missions, we are trying to strengthen the voice of Japan in the world, because it is here that everyone willing will be able to learn about our language and culture”, said Emiko Hayatsu.

Vice-Rector for Research, Teaching and International Cooperation Mariya Zubrytska thanked colleagues from Japan for the fact that the University of Lviv was the first educational institution in Ukraine to launch the “Global Japan Office”.

“Our University is the first in Eastern Europe, in which another “Global Japan Office” opens. And this is deserved, because Lviv University has a long tradition of Japanese studies and orientalism”, said the Vice-Rector.

In her speech, the Vice-Rector for International Cooperation stressed that the opening of the Tokyo University office will not only promote cooperation between states and will allow the promotion of Japanese culture in Ukraine, but will also serve as a good basis for the promotion of Ukrainian studies in Japan.

The Dean of the Faculty of Philology Svyatoslav Pylypchuk pointed out that Japanese studies are one of the areas that are developing dynamically at the Faculty. According to the Dean, the best sign of the successful formation of Japanese studies is the large number of those who want to study it and the satisfaction students receive from the knowledge of Japanese culture and language.

In the end, the parties exchanged gifts and all the attendees collectively performed the student anthem “Gaudeamus” in Japanese, Latin and Ukrainian.

It is worth mentioning that the agreement on cooperation between Ivan Franko National University of Lviv and Tokyo University of Foreign Studies was signed in 2016. Now Lviv University accepts three students of the Tokyo University who study Ukrainian language and culture at a short-term program; a student of the University is also recommended to study in Japan.

Therefore, the initiative to open the “Global Japan Office” at the University is extremely relevant and necessary. From the Japanese side, a teacher of Japanese Language and Literature is recommended by the Tokyo University, which is a very significant help in preparing students of Japanese Studies who are studying at our University.

The Tokyo University of Foreign Studies is one of the leading universities in Japan with its deep history and great scientific and pedagogical potential. It currently teaches 27 languages and literatures of the world at the specialty level, besides, many languages are taught optionally, Ukrainian being among them.