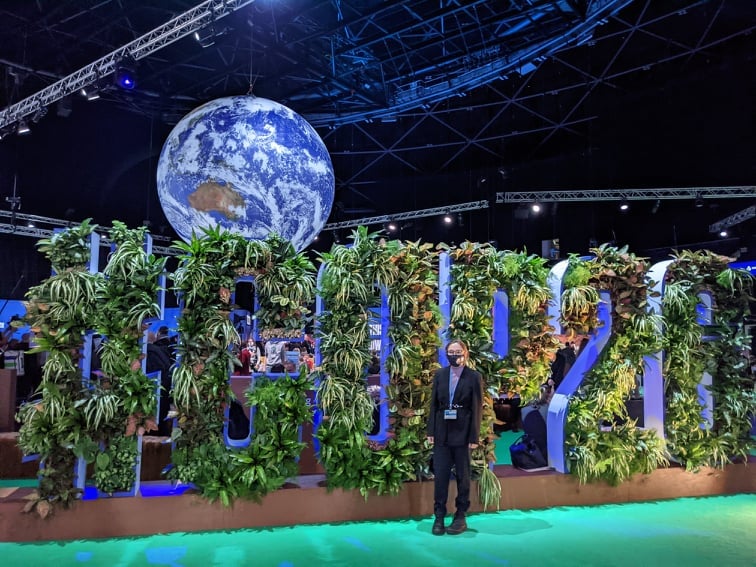 With the assistance of UNICEF, Nina Rubakha, a student from the Faculty of Geography at Ivan Franko National University of Lviv, represented Ukrainian youth at the largest climate change event, the 26th United Nations Climate Change Conference (COP26).

The conference was held in Glasgow (Scotland) on 1- 12 November, 2021 (but delayed by a year due to the COVID-19 pandemic). It was a British and Italian joint event and was participated by countries that have signed the UN Framework Convention on Climate Change (UNFCCC), a treaty that entered into force in 1994.

The overriding priorities of the United Nations Climate Change Conference were to intensify efforts to enable the full and sustained implementation of the Paris Agreement, to adapt for the communities and natural habitats protection, to mobilize finances as well as global engagement and establishing. The event brought together world leaders, national governments, NGOs and activists from nearly 200 countries to discuss climate change and make decisions and commitments on how to tackle the problem best.

The University student received the right and honor to represent Ukrainian youth at the Conference due to her active community work and scientific interests. Nina is a member of the Plato NGO, which is working to adapt Lviv to the effects of climate change. The organization advocates for climate issues at the level of local governments, promotes the nature-based solutions (NBS) and implements NBS within the urban space.

As part of her master’s program “Geoecological Information Systems”, the student writes a qualifying scientific work on “Climate change and climate policy of the city of Lviv.” Thus, the overlapping of academic interests and social attitude became a convincing argument in the screener.

Nina considers her participation in the Conference effective and valuable. “This summer, the world reminded the residents of Lviv of such a global problem as climate change. Felled trees, flooded streets, human casualties and the destruction of infrastructure have once again provided impetus to lean towards the study of climate change. The conference helped me to look at the problem more broadly, to find out about the experience of other countries, to share my experience and as a result to use new knowledge in my scientific work and public activity. The conference is an opportunity for young people to be heard, ” Nina shares her thoughts.

Participation of  Ukrainian Youth  in the Conference involves the establishment of potential links and channels of communication between representatives of other countries, highlighting the problems and prospects of youth policy in the context of climate change. For example, a meeting of the Ukrainian delegation with YOUNGO and UNICEF officials took place at COP26. The parties discussed possible formats of cooperation and involvement of Ukraine in the global initiative, which emphasizes the fact that climate change is a crisis for children and youth – the “Declaration on Children, Youth and Climate Action”. The Government of Ukraine, with the support of UNICEF, will continue to make efforts to be included in the Declaration.

“We would like the young people’s opinion to be critically important for Lviv in shaping the climate vision. At COP26, former US President Barack Obama emphasized: “The most important energy in climate movement comes from young people. The reason is simple – they are more interested in this fight than anyone else. ” Justice between the generations is gained a foothold in the Paris Climate Agreement. To make this principle a reality, the first step is to work with young people as equal partners in climate change negotiations. Young people from all over the world are  powerful agents of change, bringing new groundbreaking ideas and green awareness. Young people are fighting for their own climate education, insisting on more ambitious political reactions and climate action, and bringing governments and businesses to justice, ”Nina Rubakha said.

We congratulate Nina on this major step forward her career path and wish her energy and inspiration to realize all her ambitious plans and lofty dreams.

Adapted from the Faculty of Geography information

INTERNATIONAL ROUND TABLE “Historical ethnomusicology on Jewish-Ukrainian and Jewish-Polish encounters before the 1840s” with participation of scholars from Ukraine, Israel, Poland
Scientists of Lviv University have been awarded regional prizes