Home
About University
Our mass media

Official mass media at Ivan Franko Lviv National University is the information-analytical journal “Kameniar”, launched in January 1968. The purpose of the journal is to inform students, faculty, staff and anyone interested in news about the University, as well as staff’s and students’ educational, scientific and artistic achievements, activities of student public organizations, administration, and entertainment. 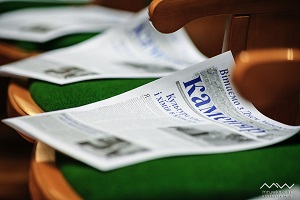 Student television at Ivan Franko Lviv National University «Franko TV» was founded on Oct. 11, 2013. The project was launched by the students of the Faculty of Journalism on the basis of educational Television and Radio Studio of the department of Radio and Television. The students prepare video about the University life and the academic community, social and cultural events of the city and Ukraine. Today the channel «Franko TV» has over 320,000 views on youtube and nearly 800 followers.

International student scientific and legal Almanac «Vivat Justitia!» was founded in 2002 by the Student Research Society of the Faculty of Law at Ivan Franko Lviv National University. Young researchers, lawyers of different countries publish their scientific achievements in it. Particularly noteworthy is the high scientific level of its publications as well as its multilingual materials.

Editorial Board (faculty students) is responsible for the preparation of almanac release «VivatJustitia!». Articles are chosen in a competitive way by professor-reviewers of the Faculty of Law. 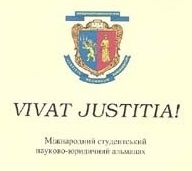