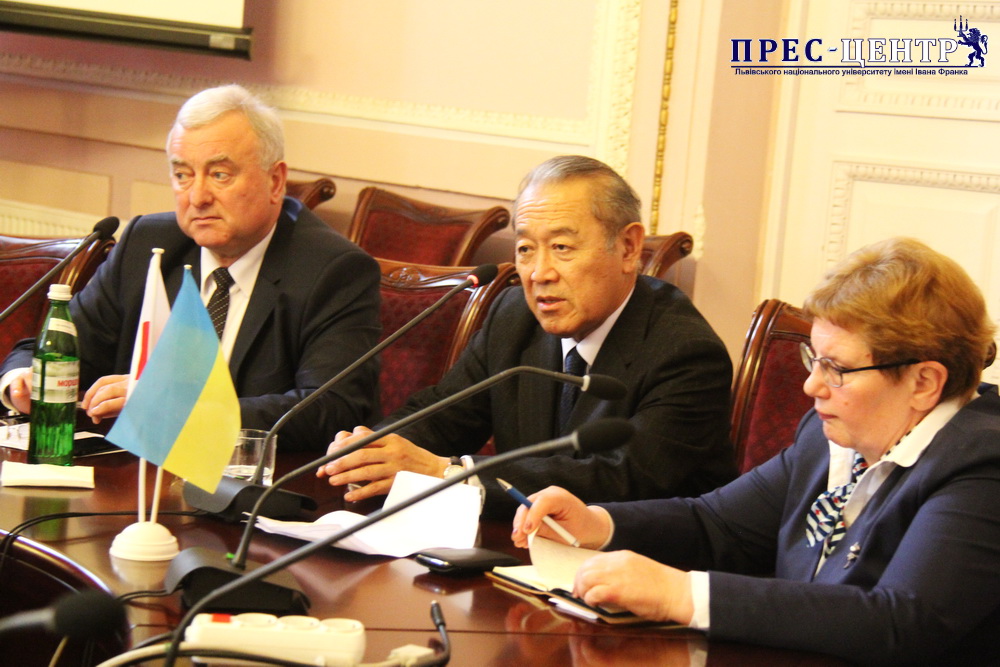 As part of the Year of Japan in Ukraine the Ambassador Extraordinary and Plenipotentiary of Japan to the United States (2008-2012) Ichiro Fujisaki visited Ivan Franko National University of Lviv on May 5, 2017. During his visit, the Japanese diplomat told the students of the University about the political, economic and social transformations taking place in Asia, Japan’s foreign policy priorities and global challenges facing humanity.

Analyzing the balance of power in Asia and the changes that occur in the leading countries of the region, Ichiro Fujisaki particularly noted active development of China and stressed the importance of establishing and preserving secure political and economic relations in the Asian region. The diplomat also analyzed the policy of North Korea; pointing out that aggressive behavior of official Pyongyang is an attempt of the government to protect its power in such a way.

International relations play one of the key roles in ensuring peace and understanding in the Asian region. In particular, the diplomat noted that joint efforts of Japan, China, USA and other countries are very important to directly affect the situation in the region and neutralize threats and promote dialogue with North Korea.

As for the relations with Russia, Ichiro Fujisaki stressed that it is the only country which Japan still has unresolved territorial issues with. According to the diplomat, Tokyo and Moscow are trying to solve the belonging of the Kuril Islands to this or another country, as well as the management on the disputed territory by means of a dialogue.

Answering the question about sanctions introduced against Russia, Ichiro Fujisaki assured that his country will continue to be fundamental in relation to the policy of military aggression of the Federation that it shows towards Ukraine.

“We will continue to declare that the policy waged by Russia against Ukraine is unacceptable for us”, said the Japanese diplomat, adding that it is extremely important not to stop talking about Crimea at the highest international level. According to him, it is necessary to constantly remind the history of Russian aggression in Ukraine, because it is the only way to keep the hope that the situation will change for the better.

In addition, Ichiro Fujisaki told about the peculiarities of Japanese diplomacy; he shared his vision of the current geopolitical situation and possible solutions to pressing problems, and also spoke about the policy of “soft power”, which for the official Tokyo is the development of Japanese culture and its popularization in the world.

“It’s very important for us when people like Japan. If you want to get to know our country, start with the simple: see the anime, taste dishes of Japanese cuisine, read modern literature” called to youth Ichiro Fujisaki.

Let us remind the Ambassador Extraordinary and Plenipotentiary of Japan to Ukraine Shigeki Sumi visited the University on 20 April, 2017 (see the link).

Facts in brief. Ichiro Fujisaki is the Director of the Institute of International Relations of Sophia University (Japan), the President of the America-Japan Society Inc. In 2008-2012 he was the Ambassador of Japan to the United States; 2005-2008 – Permanent Representative of Japan to the UN and WTO in Geneva; 2002-2005 – Deputy Foreign Minister of Japan; 1999-2002 – Director General for North America  of the Ministry of Foreign Affairs of Japan.