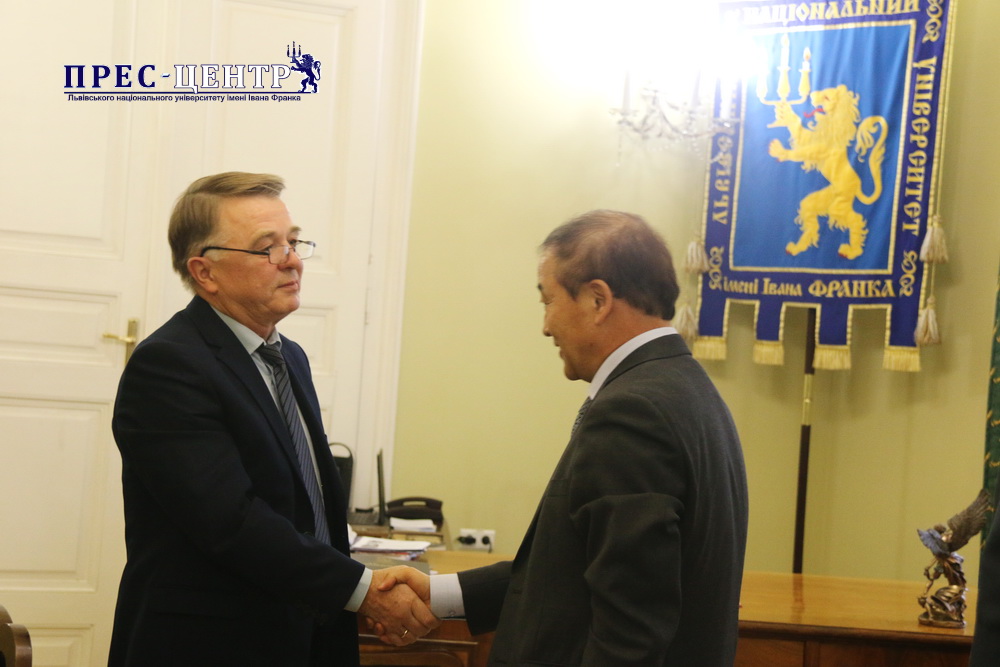 On October 27, 2017, the Rector of the Ivan Franko National University of Lviv, Professor Volodymyr Melnyk, met with the Ambassador Extraordinary and Plenipotentiary of the Republic of Korea to Ukraine, Lee Yang-goo. Vice-Rector for  Research, Teaching and IT-Development, Vitaliy Kukharskyy, Honorary Consul of the Republic of Korea in the city of Lviv, Vladyslav Rtishchev, and other representatives of the diplomatic corps of Korea in Ukraine took part in the meeting.

The parties discussed prospects of cooperation in education, science and culture. The Ambassador Extraordinary and Plenipotentiary of the Republic of Korea to Ukraine, Lee Yang-goo, emphasized that Lviv University is a world-renowned scientific center. Thus the Korean diplomat pointed out that his country is interested in cooperation with the University’s scientists, and the Embassy is ready to support the implementation of scientific developments of Lviv University.

Lee Yang-goo also assured that the Embassy of the Republic of Korea in Ukraine would promote cooperation between the Ivan Franko National University of Lviv and leading Korean higher educational establishments.

The Rector of the University, Professor Volodymyr Melnyk, expressed his gratitude to the representatives of the Republic of Korea for offering cooperation and stressed that the University of Lviv is always open for proposals aimed at the development of Ukrainian education, science and culture.

RETHINKING REGIONAL STUDIES: THE BALTIC-BLACK SEA CONNECTION
AT LVIV UNIVERSITY, MINISTER OF EDUCATION AND SCIENCE OF UKRAINE TELLS ABOUT LANGUAGE ISSUE IN LAW ON EDUCATION