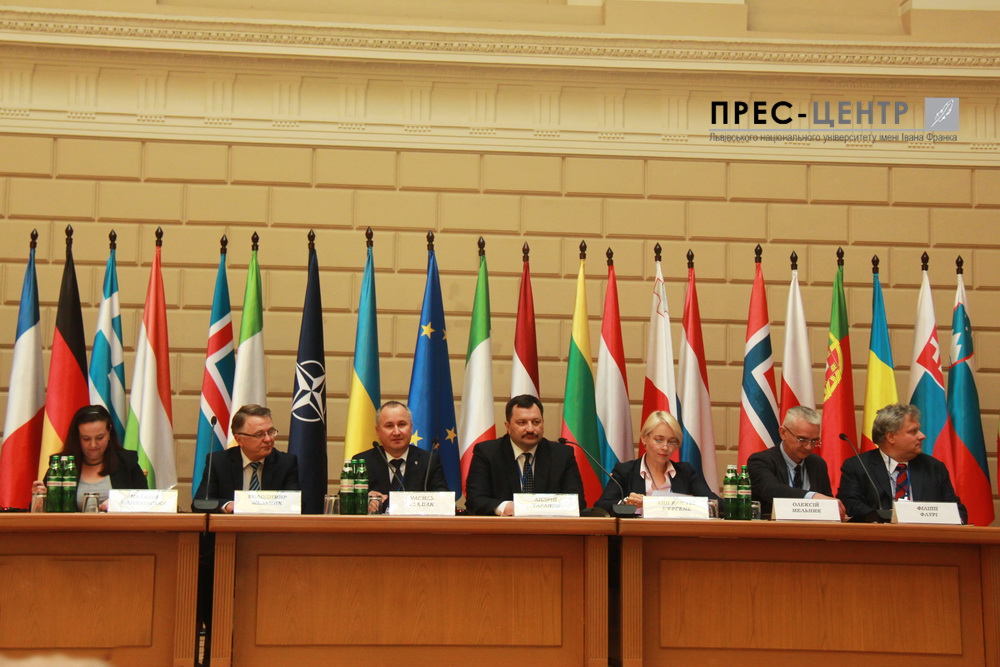 Under the patronage of the President of Ukraine and on the initiative of the Security Service of Ukraine the VIII-th International Conference “Protection of Democratic Values and Human Rights in the Activities of Intelligence Services” took place on May 26, 2016 in the Assembly Hall of Lviv University.

The conference participants are: representatives of Security Service of Ukraine, the National Institute for Strategic Studies under the President of Ukraine, Razumkov Centre, NATO Liaison Office, NATO Information and Documentation Center in Ukraine, the Geneva Centre for the Democratic Control of Armed Forces, representatives of Ukraine’s security sector institutions, NGOs , scientists, experts, teachers and students of Lviv National University.

The chairman of the Security Service of Ukraine Vasyl Hrytsak opened the conference. Vasyl Sergiyovych said that with the support of international partners, European security structures and international democratic institutions and civil society the Security Service of our country is undergoing renewal and reform. After telling about the main aspects of the Service activities Vasyl Hrytsak outlined the prospects of reforming the Department.

The message of the President of Ukraine Petro Poroshenko was announced by the Deputy Head of Presidential Administration Andriy Taranov. The importance of establishing a full-fledged dialogue between the society and special services of Ukraine was stressed in a congratulatory letter reading, in particular, that “the problem of the transformation of security bodies and determining the optimal balance between human rights and security of the state are the subjects of constant discussion and finding solutions by both the security services and the public”.

The Rector of Lviv University Volodymyr Melnyk started the conference with a welcoming speech. He specially paid attention to the importance of attracting students to the debate on the future of the Security Service of Ukraine. “Democracy and freedom are not abstract concepts but a dimension of the life of our university community in generations”, he said. In his view, the scientific environment, the young generation, civil society and the Security Service should act as a team for the future of Ukraine.

According to Deputy Director of the Geneva Centre for the Democratic Control of Armed Forces Philipp Fluri, it is important that the dialogue on the role of the Service in a democratic society does not take place in private but involving the public. “We believe that the time will come when you finally get rid of the Soviet past and with the support of  Western partners Ukraine will succeed in implementing reforms”, he said.

The Director of the NATO Information and Documentation Center in Ukraine Natalia Nemylivska noted the unprecedented transparency of the Service, its broad dialogue with society and commitment to communication with foreign partners.

Deputy Director of the NATO Liaison Office in Ukraine Ann Kristin B’yerhene pointed out that the conference is yet another confirmation of the great role of independent supervisory authorities in the security sector, because it involves international experts, scientists and Ukrainian youth.

“A constructive partnership with the society should be aimed at achieving common goals”, concluded the co-director of the programs for Foreign Policy and International Security of Razumkov Center Oleksiy Melnyk.

The Chairman of the Service Vasyl Hrytsak thanked colleagues from the European Union and NATO member states for expert assistance they provide our with country in difficult times of armed confrontation with Russia. “The Security Service had to be very quick to reform into effective military special service unit. We retained the flag, kept the honor, dignity, oath loyalty, and raised the morale of our officers. We did not allow the enemy to create a zone of instability in the peaceful regions of the state, formed unmanned aviation and special operations units from scratch”, he stressed.

Today the international partners view Ukrainian Secret Service as not only a recipient of international aid, but as a special service, which has acquired unique experience of combating hybrid war.

Vasyl Hrytsak said that the Service is able to confront separatism in various regions of the state, illicit trafficking of weapons, enemy attacks in the information war against Ukraine.

“It is obvious, that the aggressor plans to go far beyond the borders of Ukraine. We have to be ready to fight back. Therefore, during the reform and renewal the effectiveness of the Service can not be decreased. Combining the experience and vision of the operative situation we are to develop a model of authentic Ukrainian security services all together. There is no doubt that it must be European, built on the principles of democracy, rule of law”, said the Chairman of the Service.

Ongoing open dialogue with activists, volunteers, public figures, representatives of religious communities, concerned citizens promotes the growth of confidence in the services. The Social Council for Reforming the Security Service of Ukraine takes an active part in the development of public control over its activities.

“The purpose of the changes carried out in the Security Service of Ukraine is to strengthen its ability to resist current internal and external threats to national security, increase the contribution to European and global security, clarify roles and responsibilities, strengthen democratic civilian control, step by step recovery of normal security situation throughout the country, regardless of a region”, said Hrytsak.