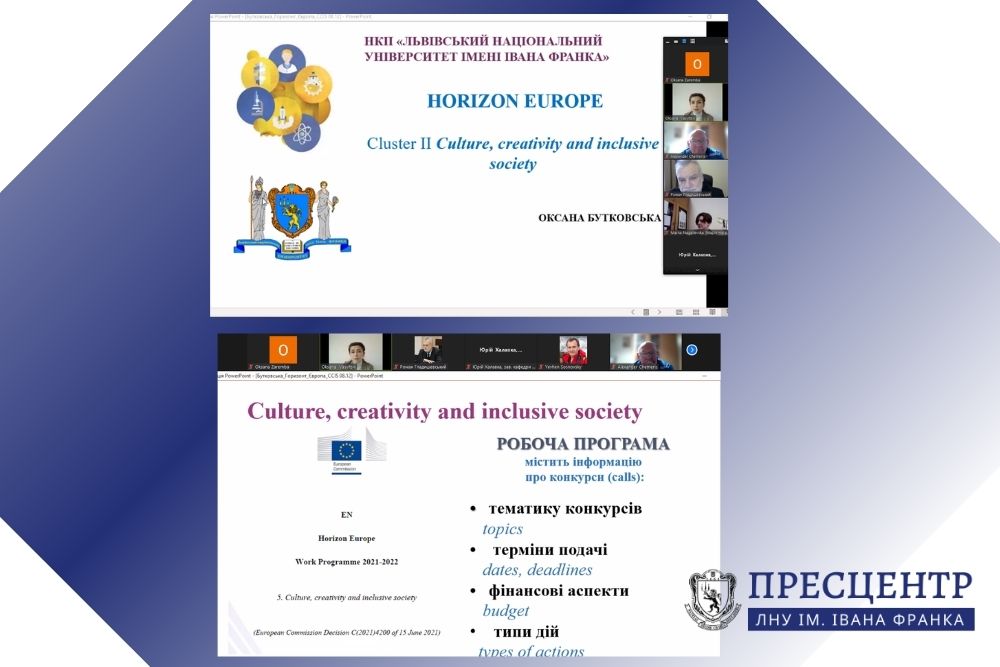 The Vice-Rector for Research of the University, Academician of the National Academy of Sciences of Ukraine, Professor Roman Hladyshevsky addressed the event attendee with an opening remarks. He noted that Ukraine’s participation in the previous EU program “Horizon 2020” was very successful, as evidenced by the number of funded projects, as well as the fact that among the associated countries Ukraine ranks seventh in terms of funds raised from the total budget.

According to the webinar program, the first speaker was Oksana Butkovska, a scientific employee of the National Contact Point of Lviv University, who presented the topics of contests in the field of “Culture, Creativity and Inclusive Society”, noting opening dates, deadlines and financial aspects of prospective proposals.

Deputy Director of the G.E. Pukhov Institute for Modelling in Energy Engineering of the National Academy of Sciences of Ukraine Oleksandr Chemerys introduced the areas of focus and current contests in the Security cluster, and also spoke about the Ukrainian  scientis .

The Deputy Director of the Institute of Biology, Chemistry and Bioresources of  Yuriy Fedkovych Chernivtsi National University Yuriy Khalavka’s speech aim was to provide information on the practicalities of submitting project proposals, as well as on a new agency in the structure of the “Horizon Europe” program – the European Institute of Innovation and Technology. In addition, the speaker also shared information about the topics this institute works on, a network of innovative communities aimed at developing new products and services as well as about creation of new companies and the younger generation of entrepreneurs trainings.