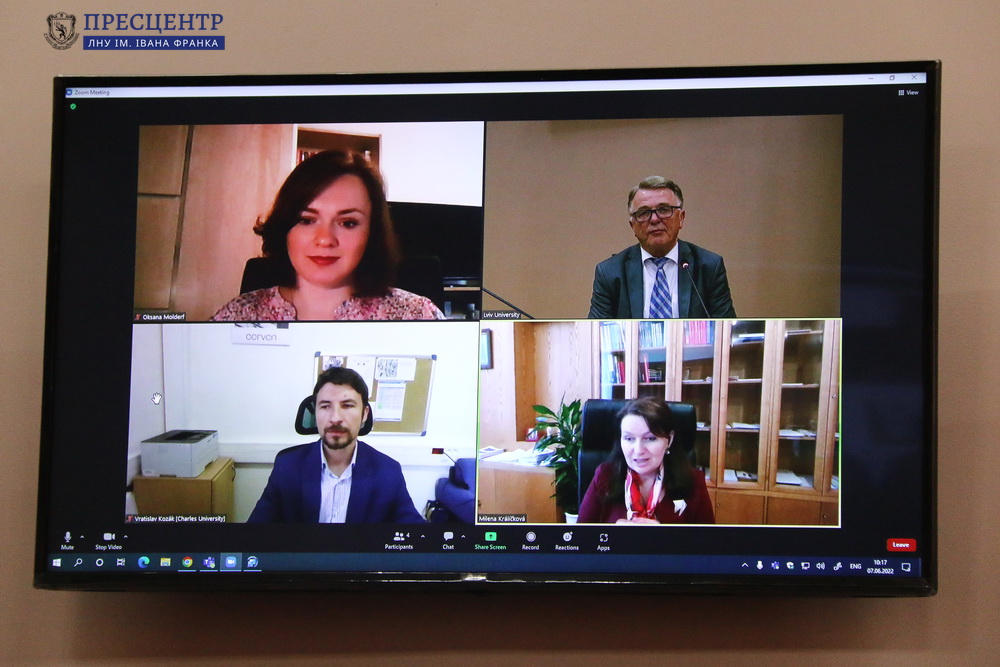 On June 7, 2022, the Rector of the Ivan Franko National University of Lviv, Corresponding Member of the National Academy of Sciences of Ukraine, Professor Volodymyr Melnyk met with the Rector of Charles University (Czech Republic), Professor Milena Kraličkova. It was an online meeting. Serhiy Riznyk, Vice-Rector for Research, Teaching and International Cooperation, and representatives of the International Relations Departments of Ukrainian and Czech universities also joined the conversation.

During the meeting, the participants discussed the ways of further cooperation between the universities and opportunities for co-working in educational and scientific areas, in particular, under the conditions created by Russia’s armed aggression against Ukraine.

In the beginning, Rector Volodymyr Melnyk congratulated Professor Milena Kraličkova on her election as Rector of Charles University and wished her success in all her endeavors, pointing out that Lviv University is a reliable partner for Czech colleagues. “I express my sincere gratitude to the staff of Charles University and all the citizens of the Czech Republic for the solidarity and support of the Ukrainian people in the fight against the Russian aggressor. I also thank you for the volunteer help and for providing shelter for Ukrainians who were forced to leave the territory of our country. We have always respected the Czech people’s national and identical position, which has been manifested in all socio-political regimes. And now, at this particularly difficult time, we not only respect you but also sincerely love you. I believe that love will last forever, “Volodymyr Petrovych emphasized and wished Charles University well and prosperity as well as invited the partners to visit Ivan Franko National University of Lviv.

The Rector Milena Kraličkova thanked for the kind words and stressed on the importance of close cooperation with Lviv University. “On behalf of the staff of Charles University and the entire Czech Republic, I express my admiration and deep gratitude to the Ukrainians for responding so courageously to the challenges your country is currently facing. You are protecting not only yourselves but all of us, all of Europe. I am glad that we have such an important meeting and can discuss potential ways of joint work, mutual support and assistance, “said Milena Kraličkova.

After that, the parties discussed the nuances of further communication for the most effective organization of co-working. Volodymyr Melnyk also spoke about the activities of Lviv University and provided some examples of successful cooperation between Ivan Franko National University of Lviv with educational centers in Europe, in particular, emphasizing the close partnership with the University of Würzburg. Volodymyr Petrovych also stressed that the University is famous for the high-quality study of all Slavic languages, including Czech.

During the meeting, the rectors of the universities jointly concluded that in order to ensure effective cooperation, it is advisable to work towards deepening relations at the level of faculties and individual departments, which will not only promote better mutual understanding in a narrow area of expertise but also form the basis for further cooperation by the implementation of dual degrees, joint virtual exchange programs and some more ambitious projects.

Previously, the parties together with the faculties and departments had analyzed potential areas for further cooperation and exchanged proposals and ideas.

As a result, the rectors of the universities agreed upon the follow-up meeting and identified further steps toward achieving the desired goals.