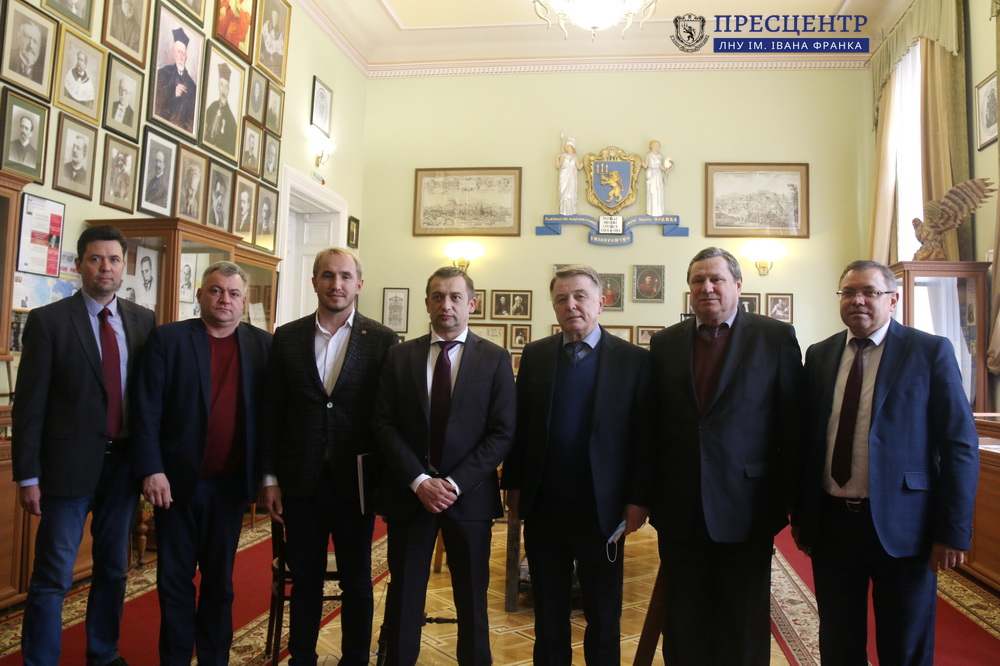 Lviv Regional Arbitration Managers Council, the Western Regional Administration of the Ministry of Justice and Ivan Franko National University of Lviv signed the Memorandum on Cooperation on 20 April, 2020.

The document was signed at the university’s History museum by Volodymyr Melnyk, the University President, Marian Chornii, the head of Lviv Regional Arbitration Managers Council and Taras Hren, the head of the Western Regional Administration of the Ministry of Justice.

The memo presupposes cooperation aiming at exchanging information and experience within the scope of functions and powers of the parties, conducting research and academic activity in the field of the debtor’s solvency or declaring him a bankrupt.

In order to reach the purpose of the memorandum, the parties decided to cooperate in preparing collective monographs, research works, working on collections of scientific articles and documents, research and scientific editions. Furthermore, the specialists of the establishments will collaborate in compiling proposals and recommendations to the bills and other normative legal acts as well as in joint scientific resources, academic curricula and action plans in the sphere of renewing the debtor’s solvency or declaring him a bankrupt.

The content of the Memo also presupposes holding joint scientific conferences, forums, seminars and trainings, roundtable discussions, master classes, webinars as well as lectures and workshops in the spheres related to their common interest.

A number of points of this Memo presupposing cooperation in adapting the academic curricula and plans according to modern requirements are essential for the development of a legal sphere. In particular, the parties decided to join the workgroups to compile and improve the academic curricula related to the requirements and necessities of studying the issue of formation and development of the arbitration managers institute and the renewal of the debtor’s solvency or declaring him a bankrupt.

At the same time the most important point in the Memo is the agreement on improving organization of hands-on training for the students of Ivan Franko National University of Lviv by implementing dual education elements, which are the part of the educational process. Thus, the Memo presupposes determining the topics of the course planning, apprenticeship and internships before the graduation at Lviv Regional Arbitration Managers Council and the Western Regional Administration of the Ministry of Justice according to the academic process schedule and following the requirements of the current legislation.

A separate point of the Memo is organization of work on upgrading and internship of the academic staff of Ivan Franko National University of Lviv.

Professor Volodymyr Melnyk, the University President and the corresponding member of the National Academy of Sciences of Ukraine mentioned that Lviv University is open for collaboration aimed at establishing the rule of law in Ukraine. Thus, the university scholars are always ready to assist in improving the legislation, giving recommendations and professional judgements.

“I’m particularly pleased that the collaboration established today opens new perspectives for our students to acquire new hands-on experience,” added Volodymyr Melnyk, having thanked the colleagues for their initiative in collaboration.