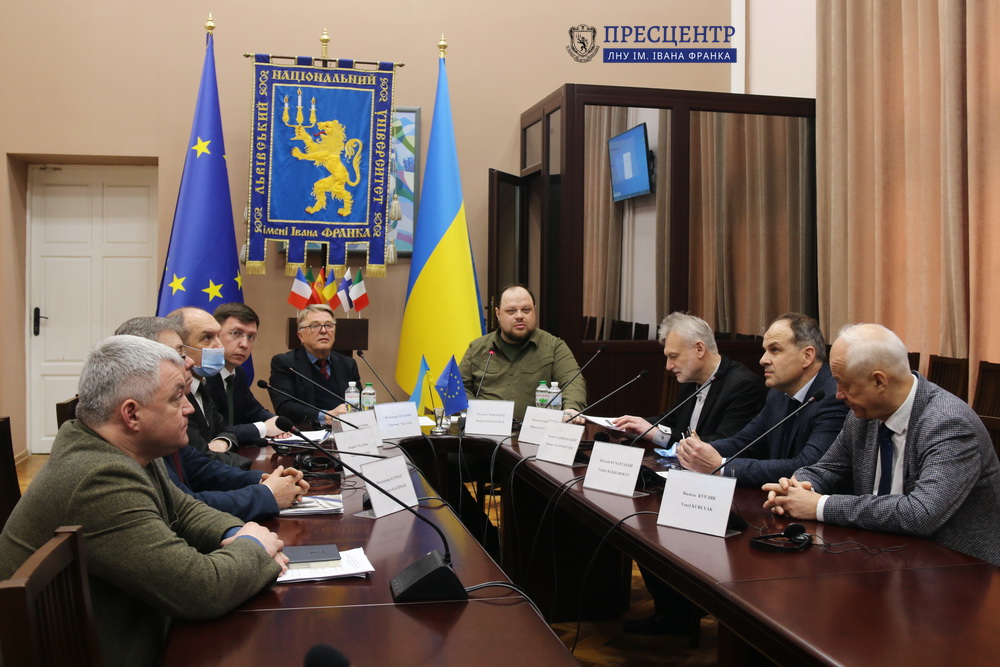 On April 6, 2022, the signing ceremony of the Memorandum took place. According to this Memorandum, Ivan Franko National University of Lviv became an associate (strategic) partner of the EC2U Alliance of European Universities. The relevant document was signed via video conference by the rectors of seven foreign higher education institutions – partners of the alliance and by the rector of Lviv University Volodymyr Melnyk. The procedure of treaty signing took place during the EC2U forum in Pavia (Italy).

On the Ukrainian side, in addition to representatives of Lviv University, the ceremony was attended by the Chairman of the Verkhovna Rada of Ukraine Ruslan Stefanchuk, and the Head of the Lviv Regional Military Administration Maksym Kozytskyi. On behalf of our colleagues from the EU, the leaders of leading European universities, representatives of the European Commission, the Mayor of Pavia, politicians and public figures participated in the event.

The proffered cooperation between the universities will cover all areas related to teaching and learning, research, and cultural activities. In particular, the implementation of a mobility program for scientists, academic staff and students, development of joint certificates (diplomas), educational programs, publication of joint publications, implementation of research projects, joint activities, summer schools, etc.

Overall, the Alliance of European Universities aims to ensure the high quality of the learning process, achieve the highest standards of research and innovation, deepen the integration of universities into the world’s educational and scientific space and create a modern cyberinfrastructure and amenities. It should be noted that Ivan Franko National University of Lviv has become the only institution of higher education in Ukraine affiliated with the Alliance of European Universities.

Rector of Lviv University Volodymyr Melnyk addressed the Alliance of European Universities’ Rectors. “After visiting our University, you will see the Latin slogan on the wall of its main building:”Well-Educated Citizens are Beauty of Motherland” .The university community is working hard to implement this idea and spread it not only in Ukraine but also abroad. At the same time, for us, as well as for you, the term “education” goes far beyond just a set of knowledge and skills, but is a value category. Therefore, our goal is to defend those fundamental ideas, without which it is impossible to imagine a full life – democracy, freedom, equality and human rights, “Volodymyr Melnyk mentioned.

Addressing the participants of the historic meeting, Volodymyr Petrovych also emphasized that Lviv University appreciates the fact that the European academic community is united in the face of contemporary challenges more than ever before. “And we are sincerely glad to be apt to stand closely with our trustworthy friends and partners, who are undoubtedly the EC2U Alliance in general and each of its members in particular. It is a great honor for Lviv University to join the Alliance as a strategic partner. Once again, I express my sincere gratitude to you for the opportunity to create our common future. Let’s be together on our way to victory “, – Volodymyr Melnyk emphasized.

The Chairman of The Verkhovna Rada of Ukraine, Ruslan Stefanchuk, addressed the audience from the Meeting Hall of Lviv University. He expressed his belief that the support of the academic community is a particularly important component of the process of forming a liberty-oriented society and affirming and enforcing human rights and freedoms.

“International cooperation in the field of education helps and creates opportunities to study, work, share experiences and inform our partners about the state of affairs not only in the academic but also in the political, and socio-economic life of Ukraine. I would like to honor our educators’ work, who, even at such a difficult time for all of us are actively working on “their front”. In a point of fact, what is meant here is resumption and continuation of the teaching and learning activities, participation in various international conferences, seminars, public lectures, interviews on radio and television around the world, publications in the press and social networks, collecting humanitarian aid, etc., – said Ruslan Stefanchuk.

The Chairman of the Verkhovna Rada also wished the academic community of Lviv University success in the implementation of shared visions and best practices in the international educational space. “The Ivan Franko National University of Lviv, as one of the oldest not only in Ukraine but also in Europe, was and remains the center of European education, scientific and cultural environment, which cooperates with many international educational and scientific institutions and represents our country in all parts of the world”, – emphasized Ruslan Stefanchuk.

The head of the Lviv Regional Military Administration Maksym Kozytskyi greeted all the celebration participants. “Today, educational institutions in our region have partially become shelters for internally displaced persons (IDP). I would like to honor the sizable contribution of the Ivan Franko National University of Lviv, which, despite all the challenges, instates the enforcement of the right for education for those who had lost this opportunity because of the war. From the administration office, we will fully support the expansion of international educational cooperation of Lviv University, as international cooperation helps to integrate high European standards into the Ukrainian educational system, “said Maksym Kozytsky.

The Director-General for Education, Youth, Sport, Culture of the European Commission Themis Christophidou pointed out that she was “pleasantly touched” by the partnership of Ivan Franko National University of Lviv with the Alliance and, addressing all members of the Alliance, thanked for the support of Ukraine and Ukrainians.

The most influential European universities Alliance Representatives with great pleasure offered the Ivan Franko National University f Lviv to join their academic family. During the Memorandum signing ceremony, Rector of Pavia University Francesco Svelto said that “the boundaries between international programs and disciplines are getting smaller and smaller, and many programs contribute to  a creation of an inclusive society, innovative training programs, educating new generations of entrepreneurs and mixed mobility.” “Unfortunately, on our route, we had to grapple with such obstacles as the COVID-19 pandemic, and now the war in Ukraine.

Pavia Mayor Fabrizio Fracassi also expressed his sincere conviction that the accession of Lviv University to the Alliance will be an important step for the societies of Ukraine and Italy. “Cultural twinning between our countries will form common values and ideas about them, it will also be the first step to our friendship and cooperation with you,” said Fabrizio Fracassi.

The Alexandru Ioan Cuza University in Iași’s Rector Tudorel  Toader pointed out that at these difficult times, the spirit of solidarity has united European states as never before. “Considering our territorial proximity to the conflict zone, we are ready to do everything we possibly can to help. This, among other things, is our willingness to provide you with our material and human resources, and humanitarian aid for victims of hostilities. Teachers, students, and families with children can find a shelter in our boarding schools, as well as medical care and psychological counseling, “said Tudorel Toader.

Ludovic Thilly, the EC2U Coordinator also expressed gladness regarding the more intense EC2U’s cooperation with Ukraine. “We are definitely heading in the right direction and so we also want to build the future. The future, which in the current context means that we can engage the partners from Ukraine. That was 7 rectors’ decision. We gave consideration to the active partnership that now exists with some Ukrainian universities and unanimously suggested that Ivan Franko National University of Lviv in Ukraine should join the EC2U Alliance as a strategic partner. Welcome to the EC2U family. You can recon on us and our support! ” concluded Ludovic Thilly.