Home
News
Michael Moser, Austrian Slavist and Ukrainist, Professor at the University of Vienna, presented the book New Contributions to the History of the Ukrainian Language at Ivan Franko National University of Lviv 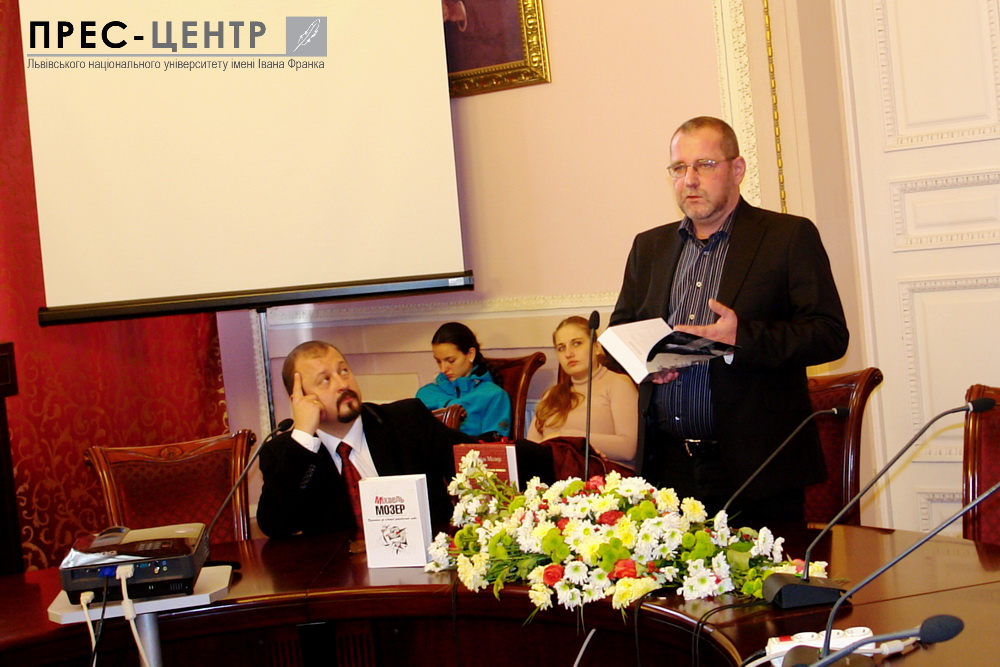 On October 31, 2016, in the Mirror hall of Ivan Franko National University of Lviv with the support of the OeAD Representative office was held a presentation of a new book by Michael Moser, the reputable Austrian Slavist and Ukrainist, Professor at University of Vienna, President of the International Association of Ukrainists.

The book was published under the title New Contributions to the History of the Ukrainian Language (Edmonton – Toronto 2016 | Canadian Institute of Ukrainian Studies (CIUS) Press.). It covers acute and controversial problems in the history of the Ukrainian language from early modern period to the present day. Despite the modest author’s definition – “contributions”, the book enriches the development of Ukrainian and Slavic linguistics and at the same time provides a strong objection to those who are still naive or, on the contrary, believes that “no separate Little Russian language ever existed, doesn’t exist and couldn’t exist”.

Bohdan Tykholoz, associate Professor of the Faculty of Journalism, the moderator of the presentation, noted that Professor Moser is not only highly qualified, knowledgable and experienced scientist and linguist but he also has a rare talent to see problems where seemingly everything has already been known, to observe them open mindedly, and, finally, to write and to tell about them in a living language, without using abstruse pseudoscientific slang.”

Readers can assure themselves of this, because the author’s previous works, including the first Contributions to the History of the Ukrainian Language, are available in the Ukrainian translation.

On behalf of the presidentship of Ivan Franko National University of Lviv, Maria Zubrytska, Vice-Rector for Research, Teaching and International Cooperation, presented to Professor Michael Moser a symbolic gift – a copy of the old Ukrainian stylus of a princely era found by archaeologists of the University, and expressed gratitude for his significant contribution to the development of Ukrainian studies and popularization of the Ukrainian language and culture in the world and expressed hope for further fruitful cooperation.

The presentation was also attended by Honorary Consul for the Republic of Austria in Lviv Markian Malskyy, students and scholars of Lviv University, representatives of higher education and academic institutions of Lviv region (including I. Krypiakevych Institute of Ukrainian Studies).

Ukrainian and Polish teachers at Lviv University discuss the idea of the university in the European and national dimensions
For the first time Ukraine welcomes the members of one of the largest international congresses of mathematicians, held at Lviv University