Home
News
MICHAEL MOSER: WE DO NOT REALLY APPRECIATE THE ROLE OF GALICIA IN THE HISTORY OF UKRAINIAN LANGUAGE DEVELOPMENT 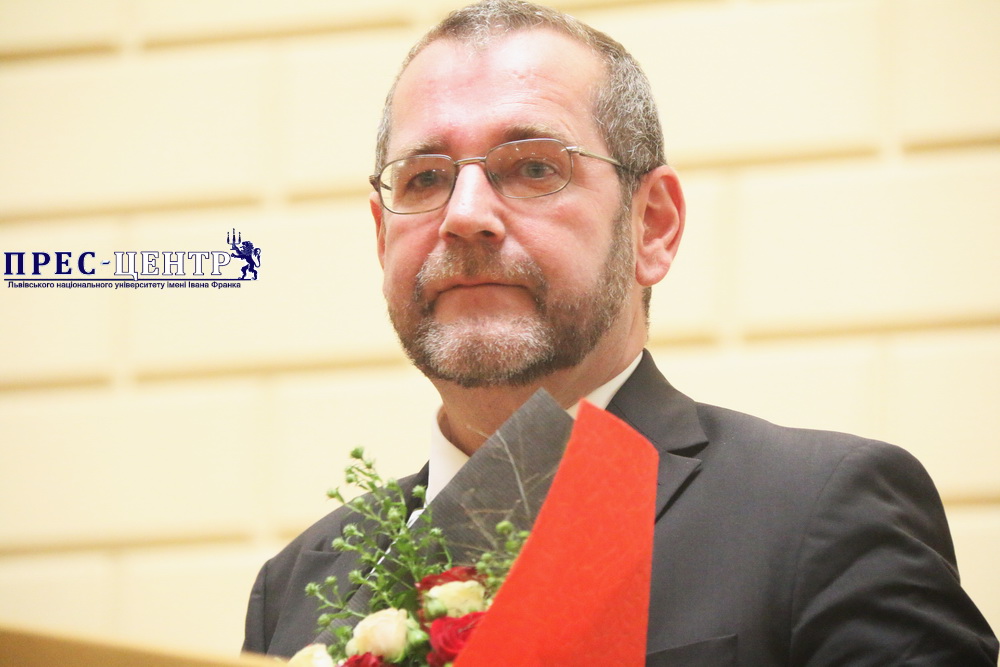 On September 27, 2017, in the Assembly Hall of Ivan Franko National University of Lviv, a well-known Austrian linguist, professor of linguistics at the Institute of Slavic Studies at the University of Vienna, winner of this year’s Ivan Franko International Prize, Michael Moser, delivered a lecture “Once again about the “Rus Trinity” and its role in the history of the Ukrainian language”.

During his speech, an Austrian scientist presented an analysis of linguistic processes in Galicia of the nineteenth century and their influence on the formation of the literary Ukrainian language.

“We do not sufficiently appreciate the role of Galicia in the history of the Ukrainian language”, said Michael Moser, adding that even outside the “Ruska Trinity” and its participants educational and literary movements in Galicia of the nineteenth century were actively developing.

Michel Moser calls Markiyan Shashkevych, Yakiv Holovatskyi and Ivan Vahylevych “great heroes of Ukraine”, “the leading intellectuals from the circle of Galician Ukrainians”, whose significance in the process of national renaissance in Galicia is extremely large. All of their work, as well as the efforts of other people who were admitted to the legendary group, is regarded by the scientist as an important factor in the development of the Ukrainian language.

However, Michael Moser protested the widespread thesis that there was nothing more significant for the Ukrainian social and cultural space than the “Ruska Trinity” and beyond it in Galicia. According to him, many active writers and scientists publicly raised the issues of the Ukrainian language and often created very good and high-quality texts.

The scientist led by the example of the works by Joseph Lozynskyi, Joseph Levytskyi, Ivan Mohylnytskyi and others, which confirm the great importance of the then generation of Galician intellectuals for the development of the Ukrainian language. Even the so-called “The Alphabet War” in Galicia, Michael Moser called a factor that had many positive potential.

“We are accustomed to our narratives, which impose the development of the Ukrainian language almost exclusively in the so-called Great Ukraine. Because of this we still do not know and do not understand what was happening then in Galicia, and not only thanks to the “Ruska Trinity”, but also due to the whole generation of Galician intellectuals”, said Michael Moser.

And so, the researcher called for more active research into the various texts of that period: artistic and poetic, scientific and journalistic works.

Also, Michael Moser spoke about the history of the publication of the almanac “Rusalka Dnistrova”, analyzed its content and emphasized the importance of the publication for the development of the Ukrainian language. According to the researcher, both the content of the almanac and the source base confirm that it is of great importance to all Ukrainians and contains the national tradition of the whole of Ukraine.

“When you are told that Galicia and the so-called Great Ukraine were different, you must understand that this is a very superficial analysis. The Galician people have always looked through Zbruch, and residents of Great Ukraine have always looked at Galicia”, said Michael Moser, adding that cultural ties between the divided Ukrainian lands have always led to the mutual enrichment and mutual reinforcement of both linguistic and social processes.

After the lecture, all presenters had the opportunity to take part in the discussion on the history of the Ukrainian language development.