Home
News
POLONISTICS IN LVIV: 200 YEARS OF THE IDEA 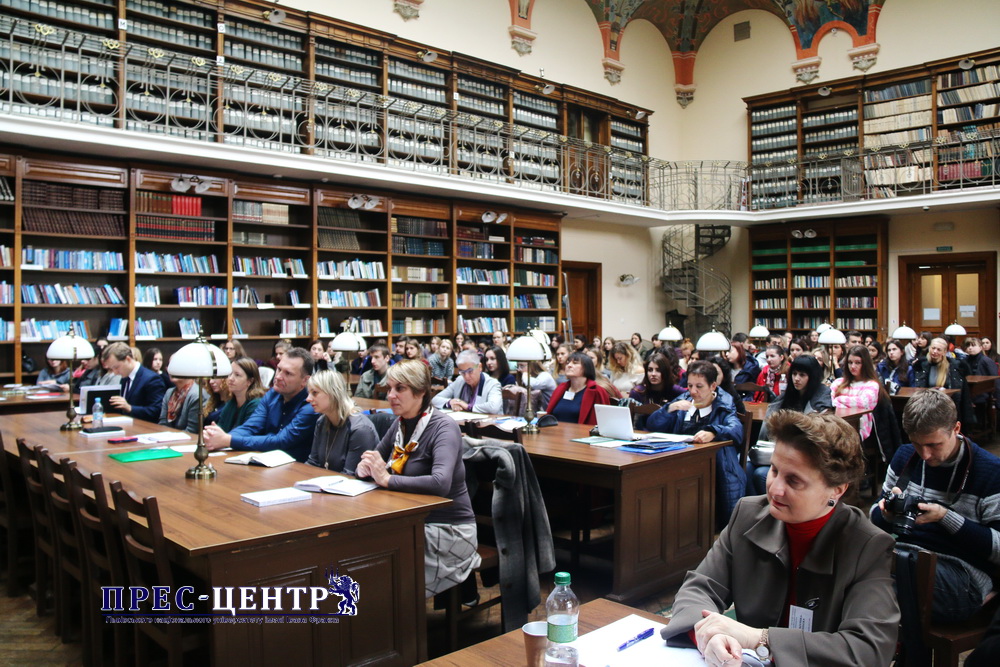 On November 3, 2017, in the framework of the conference “Polonistics in Lviv: 200 Years of the Idea”, the Scientific Library of Ivan Franko National University of Lviv hosted the Scientific Symposium “The History of Polish Language Textbooks”.

The Head of the Department of Polish Philology, Professor Alla Kravchuk greeted the participants of the scientific meeting. She briefly told about the birth of polonistics in Lviv and wished all fruitful work.

The Dean of the Faculty of Philology, Professor Svyatoslav Pylypchuk, addressed the participants of the symposium with a welcoming speech. In particular, he made an excursion into the history of the Department of Polish Philology at Lviv University and emphasized its scientific and educational achievements. By paraphrasing the words of Ivan Franko, Svyatoslav Pylypchuk wished the participants of the symposium “to build new worlds” during this Ukrainian-Polish academic meeting.

On behalf of the Consulate General of the Republic of Poland in Lviv, the participants of the meeting were greeted by attaché Piotr Hudi. Thanking the audience for the love to Polish language and culture, he noted that it is the teachers who are real ambassadors who expand the horizons and promote interethnic communication.

The first report of the symposium was a presentation by the Director of the Scientific Library of the Lviv University Vasyl Kmet “Legitimation of Polish Discourse at the Jesuit Academy in Lviv in XVII – XVIІІ”.

Colleagues from the University of Wrocław (Poland) also dwelled on a comprehensive analysis of the history of teaching and the specifics of the textbooks of the ancient times: Anna Dombkovska highlighted the topic “What Did They Study from in Ancient Times? Textbooks for Ukrainians and Russians”, and Anna Buzhinska-Kamenetska presented the report “Ancient Conversations for Foreigners as an Example of a Textbook for Communication Learning”.

There were also three reports devoted to modern textbooks of the Polish language. Thus, Małgorzata  Gembka-Voliak (Nicholas Copernicus University, Torun, Poland) spoke about the problem of using the latest textbooks in studying Polish as a foreign language at lectures in the Slavs, Małgorzata  Pasek (Wrocław University, Poland) focused on the use of selected textbooks for the study of the Polish language by Ukrainian students at the University of Wrocław, and Karolina Grabon in collaboration with Marcin Matsolek (University of Silesia, Poland) presented the paper “The Substructive Pronunciation, or on the Orphophonia in Textbooks for Teaching and Learning Polish as a Foreign Language”.

At the end of the symposium “The History of Polish Textbooks”, a discussion was held on the issues of studying the history of teaching, publishing projects and the specifics of studying the Polish language at the University of Lviv for centuries – which was chaired by the Head of the Department of Polish Philology, Professor Alla Kravchuk.

THE VI INTERNATIONAL FORUM ON PRACTICE OF THE EUROPEAN COURT OF HUMAN RIGHTS STARTED AT THE UNIVERSITY
RETHINKING REGIONAL STUDIES: THE BALTIC-BLACK SEA CONNECTION