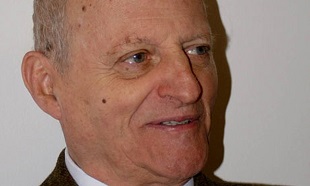 STILLFRIED Bernhard (17 November 1925, Vienna, Austria) – was a political and public figure, diplomat, Doctor of Philosophy (1953). He graduated from the University of Paris (1945-47), studied history and ethnology at the University of Vienna (1947-49, 1951-53), and also studied at the Saint Paul University (Minnesota, USA) (1949–50). He has been engaged as an employee of the European Radio Broadcasting Service of BBC (London) in 1953-58; an Austrian cultural adviser in the Middle East in 1958-74; the Director of the Austrian Cultural Institute in London 1975-86; the Director General of the Cultural and Political Department of the Austrian Ministry of Foreign Affairs in 1986-91; an Adviser to the Austrian Foreign Minister on Central, Eastern and Southern Europe in 1991-95; the head of the Austrian Cooperation, the President of the Austrian Cultural Society (Vienna) since 1993. Bernhard Stilfried initiated the establishment of Austrian libraries in Lviv, Chernivtsi, Kyiv and Kharkiv (1993-95). He facilitated the opening of the Ukrainian-Austrian Cooperative Bureau of science, education and culture in the Ivan Franko National University of Lviv (1998).