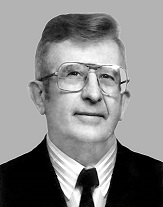 Research interests: experimental research dedicated to the study of the nuclear reactions mechanisms and the atomic nuclei structure. The most famous scientific achievement of Oleksa-Myron Bilaniuk is a paper on the possibility of the existence of particles moving at speeds greater than the speed of light in vacuum, published in the American Journal of Physics (1962) and co-authored with the Indian physicist George Sudarshan.