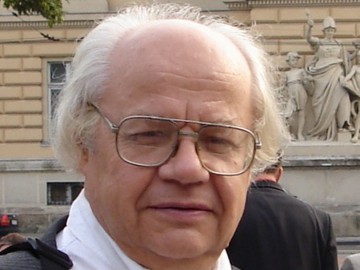 Drach Ivan Fedorovych (17.10.1936, the village of Telizhyntsi, Tetiivka region, Kyiv oblast’) – a poet, scriptwriter and public figure. He studied at Kyiv University (1958-61), graduated from the Higher Screen Courses of the USSR State Film Agency (Moscow, 1964). Since 1961 he has been an editor of the newspaper “Literary Ukraine”; employee of the script department of the Dovzhenko Kyiv Film Studio, editor of the “Vitchyzna” (Motherland) magazine; Secretary of the Board of the SPU (National Writers’ Union of Ukraine).

He has been a Member of the National Writers’ Union of Ukraine (since 1962). Member of Parliament of Ukraine of the I-IV convocations. He participated in meetings of the UN General Assembly as an advisor to the delegation of the Ukrainian SSR. Member of the Committee of the Taras Shevchenko National Prize (since 1999). Chairman of the State Committee for Information Policy, Television and Radio Broadcasting of Ukraine (2000-02). Chairman of the Board of the “Ukraine-World” Society, Presidium of the Congress of the Ukrainian Intelligentsia. State Prize of the Ukrainian SSR. Named after T. Shevchenko (1976); State Prize of the USSR (1983, 1989); Literary Prize of the Latvian SSR named after O. Vatsiyetis (1984); Antonovychi Foundation Prize (USA). Order of Prince Yaroslav the Wise of the 5th degree (1996). Dr. honoris causa Lviv. University (1997). Hero of Ukraine (2006).