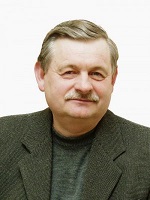 Yaroslav Ivanovych (30 October 1953, the village of Zymna Voda, Pustomitivskiy district, Lviv Oblast) – mathematician, Candidate of Physical and Mathematical Sciences (Application of renewal theorems to the asymptotic analysis of semi-Markov and branching processes, 1980), Associate Professor (1991), Doctor of Physical and Mathematical Sciences (Asymptotic analysis and transients in matrix-valued random evolutions, branched processes and processes with Markov case intervention, 1995), Professor (2002). He graduated from the Faculty of Mechanics and Mathematics of Ivan Franko National University of Lviv (1976), postgraduate studies of Institute of Mathematics (1979). He worked as engineer of the Сomputing Center of the Lviv branch of mathematical physics of the Institute of Mathematics in 1979; Junior Research Fellow of Institute for Applied Problems of Mechanics and Mathematics in 1980-85; Senior Research Fellow of Research Department in 1985-89; Assistant Lecturer in 1989-90; Associate Professor in 1990-97; Professor of the Department of Higher Mathematics in 1997-99; Head of the Department of Theoretical and Applied Statistics of Ivan Franko National University of Lviv since 1999.