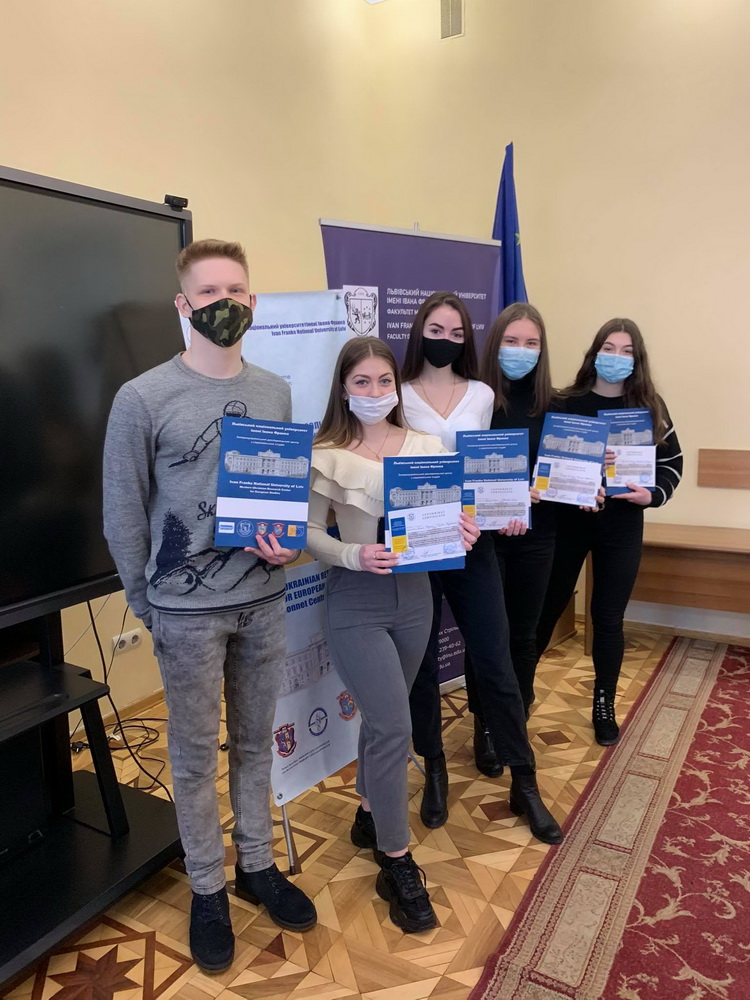 The certificate ceremony on the successful accomplishment of the 3rd Wurces Winter School of the Jean Monnet Centre of Excellence was held at the faculty of International Relations at the Ivan Franko National University of Lviv. The school was conducted online during 22-26 February, 2021 within the implementation of the project 599469-EPP-1-2018-1-UA-EPJMO-СоЕ: Western European Research Centre in European Studies.

Despite the unfavourable epidemic situation in Ukraine and in the whole world and owing to the opportunities online studying presents, students of different majors from Kyiv, Kharkiv, Dnipro, Odesa, Vinnytsia, Lviv, Zhytomyr, Lutsk and other Ukrainian cities participated in it.

The members together with Ukrainian and international students had the chance to acquire new knowledge on the European Union, its system and the principles of its functioning during the week of the course. In particular, the participants had the opportunity to discuss the history of the origin and modern challenges for the European integration was with Roman Petrov, the honoured president the Ukrainian association of the European Studies, projects coordinator Jean Monnet, Ph.D. (Great Britain), the head of the department of the international and European Law at the National University of Kyiv Mohyla Academy, professor of the department after Jean Monnet. The modern challenges between the EU and Ukraine were mentioned in the report by Daniel Cramer, the sales manager at the EU Delegation in Ukraine. The role of the EU in the world was presented by Roman Kalytchak, docent of the department of International relations and Diplomatic Service.

The school organizers of the school paid particular attention to the economic aspects of the European integration. Therefore, professor of the university of Sussex (the UK) Erica Shyshak presented the ideas of the EU digital market and the attorney of the company Freshfields Bruckhaus Deringer Heinrich Nemechek (the Federal Republic of Germany) characterized the EU economic liberties as the main basis of the economic prosperity and the development of the European Union.

Particular attention has been paid to the peculiarities of formation and development of the common EU policies, in particular, in the educational, youth and scientific spheres presented by Oksana Krayeska, docent at the department of Country Studies and international tourism, Institutional coordinator of the “Erasmus+” programme at Lviv University. On their last day the participants were given the opportunity to discuss the European policy of neighborhood cooperation and Eastern Partnership, characterized by the professor Nataliia Antoniuk, the head of the department of Country Studies and International Tourism. As far as the experience of leaving the EU and its consequences for the European Integration are concerned, the school participants spoke with professor Adam Lazovskii from the University of Westminster.

Moreover, a round table discussion was held the topic of which was a current state and tendencies of the collaboration between the EU and Ukraine within the context of implementation of the Association Agreement, experience of collaboration of the EU with less developed countries regarding the processes of extension to the full membership in the EU. The participants of the meeting also discussed the future relationship between Ukraine and the EU, in particular through the prism of the pandemic affect on the relationship within the EU and the relationship of the EU with less-developed countries.

Oksana Holovko-Havrysheva was the moderator of the school, docent of the department of the European Law, the head of the Centre after Jean Monnet at Ivan Franko National University of Lviv.

The 3rd Wurces Winter School was held in collaboration with the Ukrainian association of the European Studies and the Information Centre at Ivan Franko National University of Lviv as well as thanks to the support of the National Erasmus+ Office in Ukraine.

Transition to Temporary Online Studying has been Introduced at the University since March, 15
The President of the University Volodymyr Melnyk met with the representatives of the Embassy of Kazakhstan in Ukraine