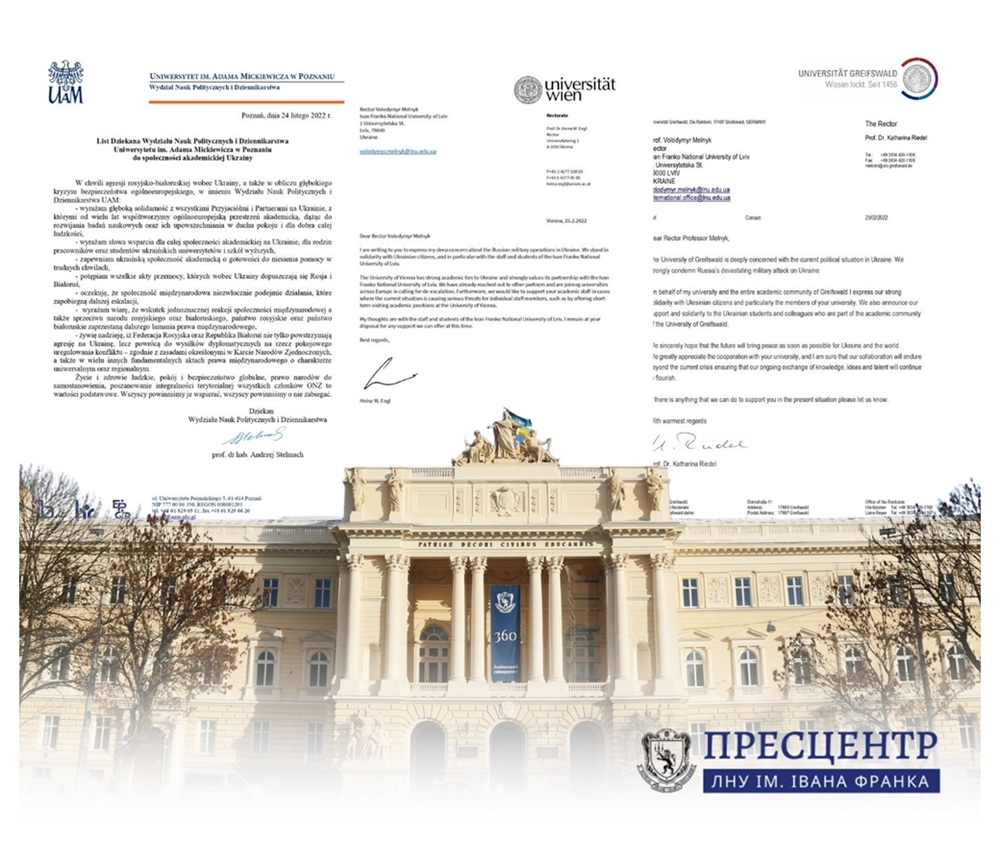 Since the first hours of the full-scale war between Russia and Ukraine, Ivan Franko National University of Lviv has received a large number of letters from foreign partners. The level of support shown to us today from all over the world testifies not only to the unity and consolidation of the world academic community but, above all, to the awareness of the threat which Ukraine’s Armed Forces are defending Europe and the world today from.

“ During these tragic times, we are constantly thinking about you, compassionating you every day, even if just giving you moral support, we support you! Please accept our heartfelt condolences from me personally and from all our academic community”- Professor Bohumila Kanevska wrote in her letter.

“In defiance of the international law norms, for the ninth year in a row, your country has been forced to defend national and European values, protecting its lands from the armed invasion of an aggressive neighbor. Especially today, when the Russian aggressor is attacking from all possible sides and is gazing with its “insatiable eye” more and more menacingly into the space of your freedom-loving sovereign state, our hearts and minds are in spirit with you,” Violeta Khlon wrote in her address.

In his letter, the rector of the European Humanities University, Professor Serhiy Ihnatov, also uncompromisingly voiced support of Ukraine and condemnation of Russia: “We support the consolidated position of the democratic world against the violent scenario that Russia is exploiting in 2022, covering up with its “national” and “denazification” motives, rudely, brutally and inhumanely using its military capabilities to strike at the sovereign state of Ukraine. As a result, Ukrainian cities, its capital – the city of Kyiv, infrastructure, and, unthinkably, civilians, children, unarmed and innocent people who awoke on February 24, 2022, to the sounds of sirens and explosions are suffering. It is impossible to imagine that in the 21st century geopolitical interests are higher than the cost of human life, it is horrible to neglect human rights in order to satisfy political ambitions.”

The rector of the University of Rzeszow, Professor Sylvester Chopek, notes in his letter that the Senate of the University of Rzeszow, in solidarity with the attacked Ukrainian people, is protesting all actions, especially military ones, aimed at destabilizing the established European order. “Dear Ukrainian friends! We stand in solidarity with you, support you in our prayers and declare our help in overcoming this dramatic situation, “the rector wrote in his letter.

We also received a letter from the Head of the International Relations Department of Mykola Romeris University, which states: “ “On behalf of the academic community of Mykola Romeris University, we express our strong support for the people of Ukraine who are fighting for their Independent State and the right to live in freedom, democracy and peace. We, the people of Lithuania, stand together with your brave men and women who are in the field defending Ukraine and our common European values ​​from the cruelty of the anachronistic aggressor. Our thoughts are together with all the people of Ukraine who suffered from the war in your country, and we feel sorry for the lives Ukraine has already lost. “

Austrian colleagues are also in solidarity in their support for Ukraine. The Rector of the University of Vienna Heinz Engle wrote in his letter: “We remain in solidarity with the people of Ukraine and with the staff and students of Lviv University, in particular. The University of Vienna has strong academic ties with Ukraine and values ​​its partnership with your university. We have already turned to other partners and are joining universities across Europe, calling for de-escalation. “

Representatives of the Faculty of Economics and Management at the University of Kassel also expressed deep shock at the unjustified Russian aggression and invasion of Ukraine by the Russian military: “We never believed that this could happen in the 21st century. Our thoughts are with the Ukrainian people and with you as our partners! ”

“Bayreuth University is dumbfounded by the Russian Federation’s attack on Ukraine, which violates international law. Such Russian Federation’s actions contradict the principles of peace, freedom, the openness of the world, tolerance, and understanding of the peoples, which the University of Bayreuth is in favor of. We look forward to an end to this thoughtless bloodshed as soon as possible and to a return to peace talks and conflict resolution without the use of force, “said Bayreuth University Rector Professor Stefan Laible.

“I was horrified to hear of Russia’s attack against Ukraine. I hope and pray for the war to end soon with peace for Ukraine. This may be a miracle taking into account Russia’s determination and the relatively weak reaction of the West. Our prayers are with you, “said Professor Alfred Forсhel, Rector of the University of Würzburg.

We also received letters of support from the head of the International Relations Department of The Bronisław Markiewicz State Higher School of Technology and Economics in Jarosław (PWSTE in Jarosław) Magdalena Boyarska: “We are very sorry that the war has started in your country. On behalf of our university community, we send you sincere hugs from the depths of our hearts. ”

Mateusz Bieczynski, a representative of the Magdalena Abakanowicz University of the Arts Poznan, also supported Ukraine and offered help in this tragic situation: “Because of  the war in Ukraine, we are ready to help you if necessary. We send you words of solidarity and, at the same time, we are ready to prepare programs to help your students and their families. “

Representatives of The Baltic University Program of Uppsala University in Sweden have uncompromisingly expressed support for Ukraine in this difficult time and for their part are taking measures and sanctions against Russian higher education institutions “BUP representatives strongly condemn Russia’s invasion of Ukraine and offer whole support to those colleagues and students who have suffered the most from the war. Sweden makes an appeal to Higher Education Institutions to stop cooperating with state institutions in Russia and Belarus. Therefore, BUP’s cooperation with Russia and Belarus will be suspended until further notice. BUP contracts between Uppsala University and participating universities in Russia and Belarus will be suspended”.

The Faculty of Philosophy administration, research and teaching staff of the University of Zagreb signed on to the unified support: “In these difficult days for the Ukrainian people when Ukraine has come to the defense of its statehood and European future, we express our sincere condolences and support to you and your families.Zagreb Ukrainianists join all those who express their emphatic “NO!” to the war against the people of Ukraine! We believe that light will triumph over darkness. “

Vice-Rector of Tomasz Bata University in Zlín, Professor Lubomyr Beníček, and the University Supervisory Board expressed concern about a sequence of events in Ukraine and expressed their full support for Ukraine’s independence and territorial integrity.

Not only European but also American colleagues expressed support for Ukraine in general and Lviv University in particular. “Like many other people, we are monitoring the devastating situation in Ukraine. Our thoughts are with our partners, friends, and students of Ivan Franko National University of Lviv. As the situation continues to escalate, we hope our Ukrainian colleagues and all those affected by these events will be safe soon, ”said Professor Jamie Leibovitz, Director of Global Academic Initiatives at the University of South Carolina.

Haretoshi Horibe, CEO of “Careermaker Inc”, said in his letter: “I am writing this email to you from Japan. We care about your safety, the safety of your country, and all of you. “

Roald Hoffman, an American chemist and Nobel Laureate in Chemistry in 1981 and Honorary Doctor of the Ivan Franko National University of Lviv, also supported Ukrainians: “You are people on the frontlines, and I wish you strength.” Let us recall that it was Roald Hoffman who collected the Nobel laureates’ signatures in support of Ukraine.

We express our sincere gratitude to our foreign colleagues for their clear and uncompromising stand on the war in Ukraine, indifference, as well as for their actions aimed at helping our country and the academic community. Every word of support inspires, gives strength, confidence and brings us closer to the dream of victory over the Russian aggressor.