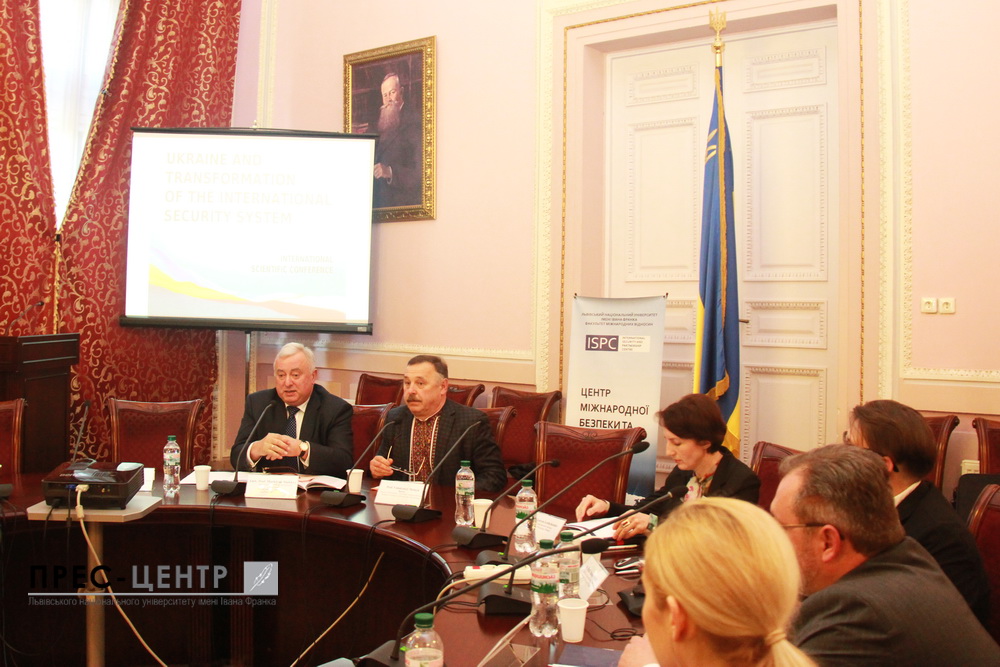 Maryan Lozynskyi, Vice-Rector for Research, Teaching, Social Issues and Development, welcomed the participants of the conference on behalf of the administration of the Ivan Franko National University of Lviv and singled out topicality and necessity of conducting events of such level. “International significance of the conference, as well as higher education and science are essential today for a successful development of Ukraine,” said Mr. Lozynskyi.

Markiyan Malskyi, Ambassador Extraordinary and Plenipotentiary of Ukraine, Dean of the Faculty of International Relations, emphasized the topicality and importance of issues concerning international security system.

«Today, we are facing the challenges of the international security that were not characteristic of the previous century. Certain values and security institutions were intrinsic to the 1990s. We considered the world to be peaceful, harmonious, accustomed to all the confrontations, and today there are completely different categories for describing the situation in the world, i.e. threats, uncertainty, challenges, confrontations, local conflicts, insurrections, wars … Ukraine has changed dramatically in the past 20 years,” Mr. Malskyi pointed out.

The Dean of the Faculty of International Relations also noted that our country is in a state of intellectual helplessness. “After the confrontation between the two systems, liberal and communist, is over, it is difficult for us to trace the trends of the world development, we are seeking new paradigms and definitions by means of which we are trying to explain what is happening in the world nowadays,” he said.

Reflecting on the realities of international security, Markiyan Malskyi pointed out that global security and stability after World War II were based on security institutions that were created for the challenges of that time. Today, according to the diplomat, they function only in static mode.

“They are programmed to solve the issues of that time, but not present-day problems. In this context, only one institution, NATO, is indeed responsible for security. Thus, it is high time to discuss topical issues concerning the role of the global security system in the world and Ukraine’s place in it, our country’s contribution in the context of global stature of strong participants such as US, EU and Russia, ” said Markiyan Malskyi.

After the inauguration of the conference, the participants continued to work in the format of two plenary sessions in the following areas: “Architecture of International Security: Global and Regional Dimension. Modern System of International Relations. Conflicts and Crises of the 21st Century” and “Foreign Policy and Diplomacy of Ukraine: Priorities and Activities. Russian-Ukrainian Conflict in the System of Modern International Compact”.

Ukrainian and Polish scholars took part in discussions of the above-mentioned issues.