Home
News
Yana Havryshko, a student of the Faculty of Journalism, is the winner of the All-Ukrainian Shakespearean Competition 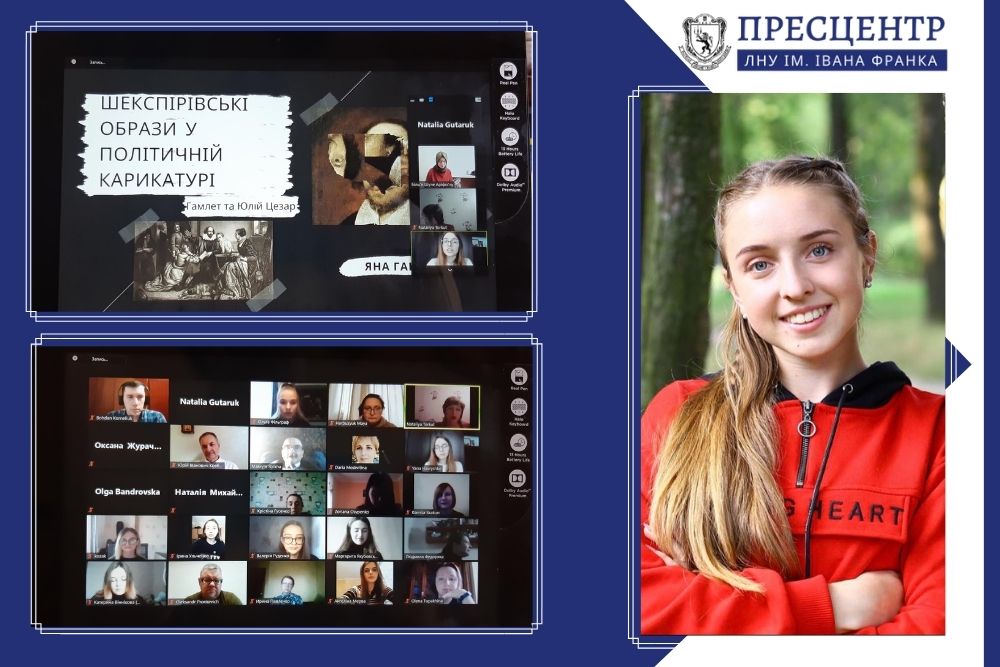 Yana Havryshko, a second-year student of the Faculty of Journalism of the Ivan Franko National University of Lviv, has become the winner of the All-Ukrainian Shakespearean Competition for Student Research and Creative Projects named after Vitaliy Keys.

The final stage of the competition was held in the format of a video conference at Zaporizhzhia National University at the initiative of the Ukrainian Interuniversity Shakespeare Center for Education and Research directed by Natalia Torkut, in association with the  Ministry of Education and Science of Ukraine and  Ukrainian National Women’s League of America (UNWLA)

Among 61 students’ projects from 16 institutions of higher education in different regions of Ukraine, which were submitted to the jury, 8 research and 23 creative projects from 30 participants were selected for the final stage. Among them 3 works were done by students of the Faculty of Journalism of Ivan Franko National University of Lviv – Yana Havryshko (second year), Yulia Kyzyk (fourth year) and Olga Matskiv (fourth year).

The projects were evaluated by a highly qualified jury consisting of 7 doctors and 10 candidates of sciences. The chairman of the judges was Natalia Torkut, Doctor of Philology, Professor, Correspondent of a global Internet project of the Folger Shakespeare Library «World Shakespeare Bibliography», and Vice President for Research at the Ukrainian Association of Foreign Literature Teachers.

Lviv University students worked on projects under the guidance of Olga Kvasnytsia, Candidate of Sciences in Social Communications, Associate Professor of the Foreign Press and Information Department.

“Shakespeare’s works should be reserached not only in the academia, but also it is necessary to try to expand Shakespeare’s discourse in a creative way,” said Olga Kvasnytsya, the scientific supervisor of the students’ projects. – Shakespeare is relevant not only in literature but also in various spheres of modern life. Thus, the essence of the latest research and such events allows us to look at Shakespeare from a different angle, allows one to “be creative” as much one wishes. It also helps to significantly expand the very form of modern research projects and actively promote Shakespeare’s legacy among students. It’s nice that our student succeeded, “said Olga Yuriyivna.

“I chose the topic of my creative project not by chance, it is my specialist area,” says the  competition winner Yana Havryshko. – Most of the caricatures which I used were exhibited at international exhibitions or published in various foreign and Ukrainian media. During the research, which lasted for about two months, I noticed that in all these cartoons a variety of images were successfully fiddled around, and therefore working on the project was interesting and exciting. At the first stage of the competition it became clear for me that it would be difficult. However, having carefully prepared to defend my presentation, I coped with the task. At first I didn’t believe that I had won the first place, but after overcoming the excitement, I’m very happy with the result! ” Shared Yana Havryshko her impressions of participating in the competition.

The winners will be awarded with the Ministry of Education and Science of Ukraine Diplomas, and the first six winners will receive Ukrainian National Women’s League of America cash prizes .

We sincerely congratulate Yana Havryshko on her victory and wish her new achievements on the path to creative comprehension of the world and scientific knowledge!