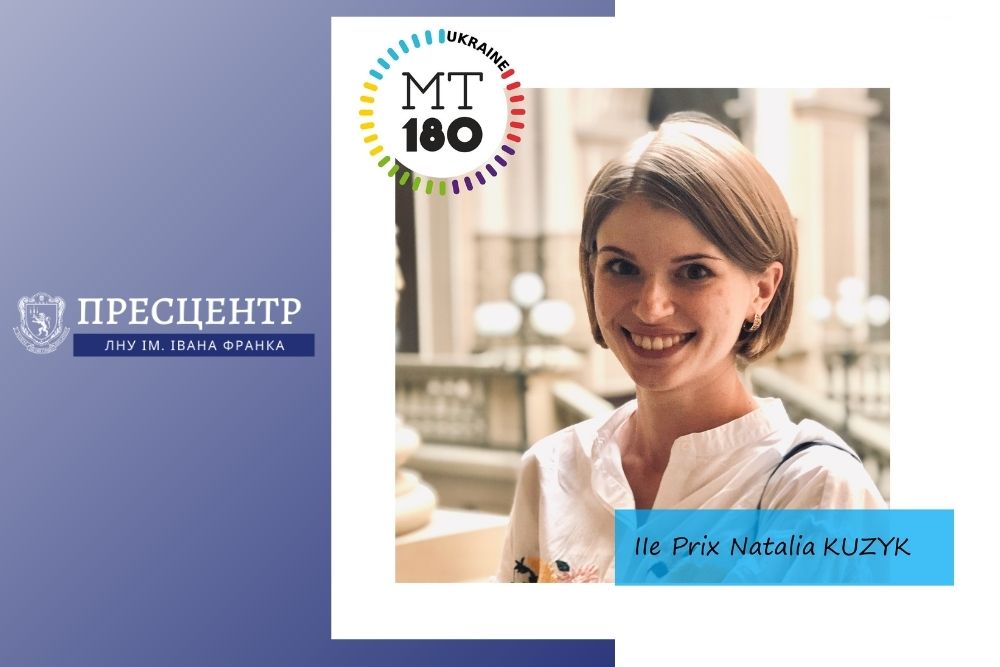 On June 3, 2021, for the first time in Ukraine, the final of the International competition “Ma these en 180 secondes Ukraine” – “My dissertation in 180 seconds” took place. It was attended by postgraduates and scientists in various branches – physicians, linguists, lawyers and representatives of technical field.

The main aim of the competition was to tell a wide audience about the essence of your thesis in an accessible and interesting way in French. Each participant had 180 seconds – i.e. 3 minutes and one slide to present the results of their research. Thus, the competition demonstrated a new, modern approach to making science available to a wide public through interaction with different areas of research.

Natalia Kuzyk, an assistant professor at the Department of French Philology at Ivan Franko National University of Lviv, managed to present to the audience the topic of her dissertation “Semantics and pragmatics of the category of substance in French literature of the second half of the twentieth century “in a convincing, clear and interesting way. As a result, Natalia Kuzyk won the second place among all contestants. Natalia Kuzyk is supervised by Hanna Kost’, Associate Professor of the French Philology Department, Candidate of Philological Sciences.

“Participating in such a competition is an interesting experience, because the work of several years (which is still going on) is not easy to describe in a three-minute story using an interesting metaphor or comparison in order to capture the audience’s attention and convey the idea to people from other fields of science.” Natalia Kuzyk.

We sincerely congratulate Natalia Yuriivna and wish her as many new victories and inspiration for scientific achievements as possible!