The Ivan Franko National University of Lviv is a classical institution of higher education with enduring traditions and powerful scientific schools incorporating modern innovative trends. The  University has a special mission: 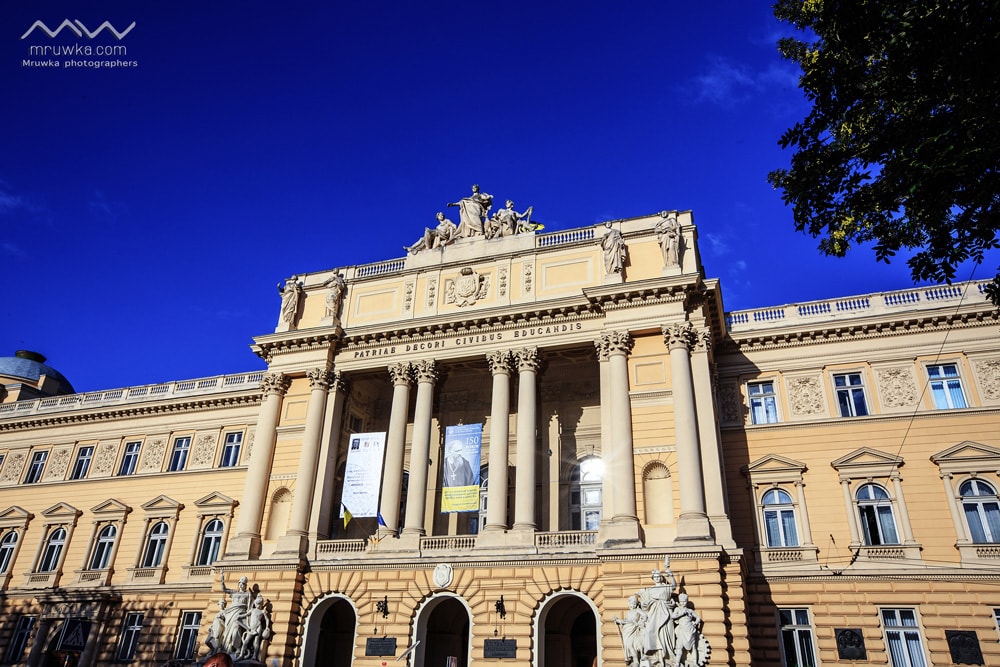 We act on the basis of preserving Ukrainian culture and developing national consciousness and identity.

The University holds the 4th level of accreditation of the Ministry of Education and Science of Ukraine and trains specialists in licensed programs: 9 specialities of an educational-proficiency level ‘junior specialist’, 49 bachelor’s degree programs, 82 specialities ‘specialist’ and 87 specialities ‘master’ in 17 branches of knowledge.

The University’s priority is scientific work. In 2014 the University conducted scientific research in 35 fundamental and 10 applied topics approved by the Ministry of Education and Science of Ukraine, out of these 3 were ordered by the State Agency of Science, Innovations and Informatization of Ukraine, 6 dealt with the preservation of objects which belong to the national heritage of Ukraine, 3 were self-financed projects and 8 Grants of International Funds.

Today, as of 2018, 19,614 students are enrolled at the University, including 728 students in colleges. Of the 19,614 students, 10,852 are taught at the expense of the state budget. The educational process at the Ivan Franko National University of Lviv is provided by the teachers of 142 departments at 19 faculties and 15-cycle commissions in three colleges. Accordingly, the University employs 4 849 people, of which 1 886 teachers (women 1451, men 741). There are 1,144 candidates for science, 229 are doctors of sciences, 816 associate professors, and 210 professors. There are 154 people in the research department.

The University has 142 departments, 99 of them are headed by doctors of sciences, 41 are candidates of sciences.

The priority direction of the University are activities is scientific work. In 2017, the University conducted scientific research on 77 topics: 56 topics funded by the state budget of Ukraine, among them 24 fundamental themes, 12 applied themes, 1 scientific and technical development, 5 scientific developments of young scientists, 3 topics of the State Fund for Fundamental Research , 2 themes under the state order, 6 themes for the preservation of the objects, which constitute the national heritage of Ukraine, 3 themes under international agreements, as well as 6 contracting topics and 15 international grants.

An important component of the system of professional training of specialists at the University is the research work of students. In 2017, the students produced 385 scientific articles, in particular, 159 – individual, and theses of 841 reports at conferences. Over 1,000 students participated in the scientific conferences. As of May 2018, 123 students of the University were trained to take part in the 2nd stage of the All-Ukrainian Student Olympiad. 40 students were chosen for participation in the 2nd round of the All-Ukrainian Student Contest on Scientific works on branches of knowledge and specialties.

Since 1996, researchers from the University have published 6,203 scientific papers in the publications that are part of the Scopus science-centered database. Leaders are faculties of natural and mathematical direction, primarily in the field of physics and astronomy, materials science, chemistry, mathematics. As of April 2018, according to Hirsch index, the Ivan Franko Lviv National University is ranked third in higher education institutions in Ukraine. Indicators: the number of citations is 32,400, the Hirsch index is 55.

In 2017, the researchers of the University published 94 monographs, 21 textbooks, 118 textbooks, 3896 articles, among them: in publications that have an impact factor of 262; in other editions, which are included in the scientific base of Scopus – 280; in other foreign publications – 452.

As of 2018, the researchers of the University published 95 monographs, 21 textbooks, 106 textbooks, 3 785 articles, among them in publications that have an impact factor of 248, in publications that are included in the scientific database Scopus – 368, in other foreign editions – 424. For the most effective developments in 2017, the University received 34 patents of Ukraine, of which 3 – for inventions. As of May 2018, 17 more patents were obtained.

During the period from January 2017 to May 2018, 96 scientific conferences, seminars, forums were organized and conducted at the University? 38 of which – on the international level.

The University is a founder and publisher of 44 scientific serial publications. Visnyk Universytetu (University bulletin): Biology Series belongs to the list of international professional editionts Web of Science. Journal of Physical Studies is one of 42 journals in Ukraine that belongs to a bibliographic database Scopus.

We go on in our achievements. In this context it would be topical to switch from quantitative to qualitative indicators: therefore the University defines for itself strategic aims of: