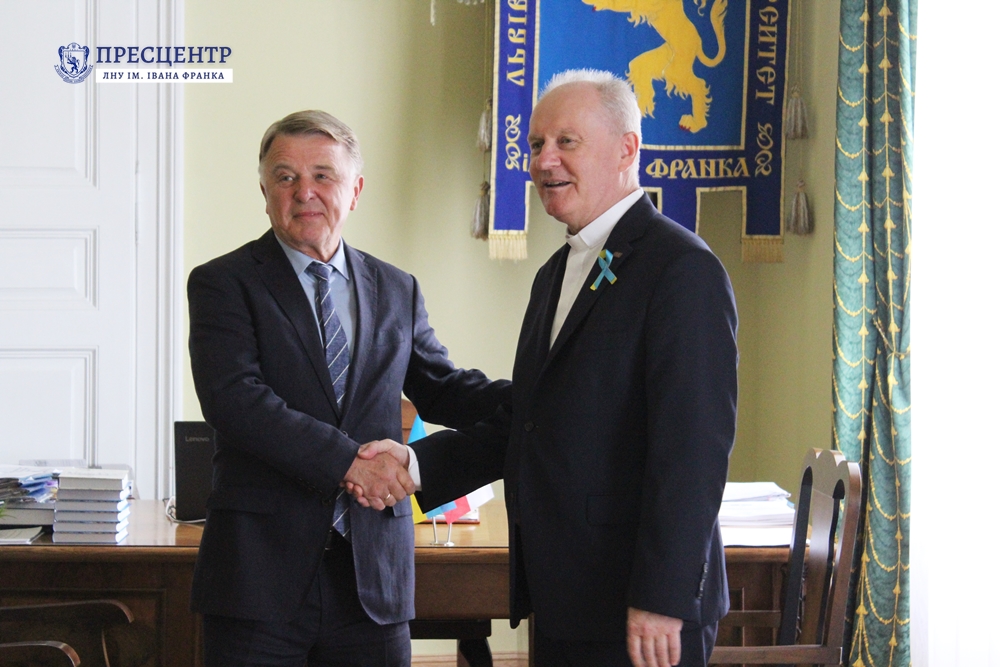 On June 15, 2022, the Ivan Franko National University of Lviv was visited by a delegation of the John Paul II Catholic University of Lublin, headed by the Rector, Father Professor Miroslaw Kalinowski. The representatives of the Lublin Catholic University had a talk with the Rector of the University, Corresponding Member of the National Academy of Sciences of Ukraine, Professor Volodymyr Melnyk and Vice-Rector for Research,Teaching and International Cooperation -Serhiy Riznyk.

Rector Volodymyr Melnyk acquainted the guests with the key aspects of Lviv University’s activities, talking about the educational, scientific, research and social mission of our Alma Mater. Volodymyr Petrovych focused his colleagues’ attention on Lviv University’s scientific cooperation with leading Polish institutions of higher education, pointing out that “the relations of Lviv University with Polish universities have always been open, fruitful and mutually beneficial.”

During the conversation, Rector Miroslaw Kalinowski spoke about the activities of the John Paul II Catholic University of Lublin while supporting Ukrainians who have fled the war to neighboring Poland. The rector particularly emphasized the fact that the Polish university has several hundred Ukrainian students and scientists who have been receiving the necessary assistance since the first days of the war. According to Professor Miroslaw Kalinowski, their university’s staff is actively involved in volunteer activities related to multifaceted assistance to Ukraine and Ukrainians.

Volodymyr Melnyk thanked his Polish colleagues for helping Ukrainian citizens who were forced to leave our country due to Russian aggression. According to Volodymyr Petrovych, such acts are vivid evidence of the Polish society’s maturity and development, which, in response to the barbarism of Ukraine’s eastern neighbor, demonstrates a willingness to help Ukrainians in the tussle with evil.

During the meeting, the parties outlined the ways for future cooperation. There was a talk about the exchange of scholarly knowledge between the representatives of both universities, in-depth collaboration between the departments, joint publishing activities, and the possibility of creating double-degree programs, which will make it possible to develop cooperation at a high academic level.