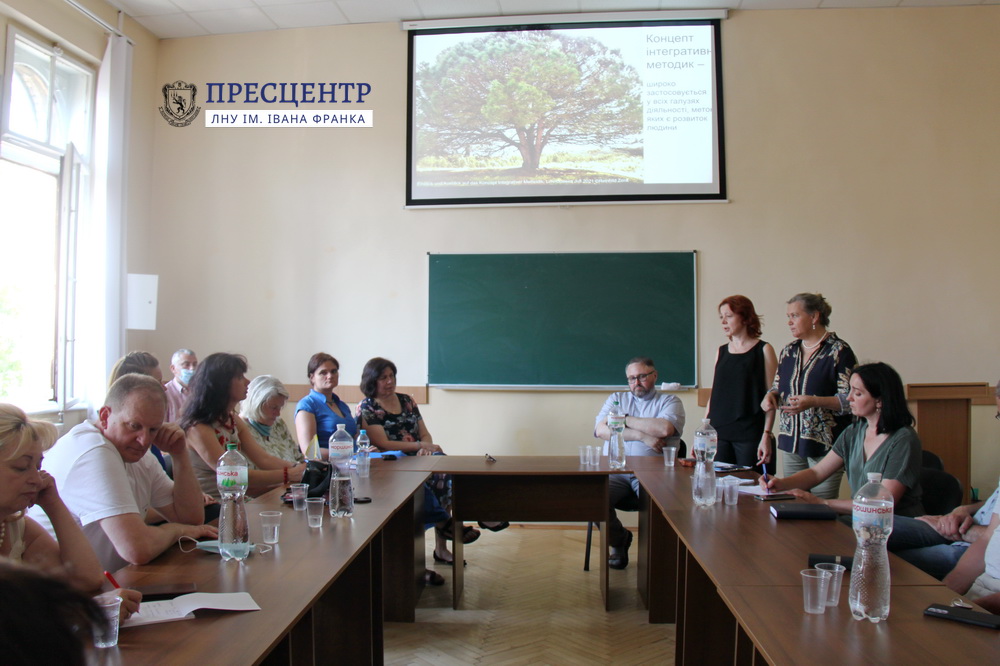 On July 12, 2021, in the assembly hall at the Department of Pedagogical Education of Ivan Franko Lviv National University, a meeting with representatives of the German CIT Institute (Germany) dedicated to presentation of current psychotherapy method in Ukraine, named the Concepts of Integrated Techniques was held.

Lecturers from Lviv University, guests from Germany, CIT participants and other specialists interested in the development of psychotherapy courses took part in the discussion. Collaboration with the CIT Institute is aimed at training specialists in Ukraine who will be able to disseminate the method developed in response to the challenge of post-war Germany when the country faced the enormous problem of the psychological trauma of war, the militaries’ inability who returned from the front to be adapted to the realities of peace. This problem is unbelievably relevant to today’s situation in Ukraine, where, unfortunately, there is a lack of experience and appropriate tools to assist JFO participants in the context of psychological trauma. At the heart of the Concept of Integrated Techniques there is a theory that explains how our vitality is formed and how it is possible in practice to evoke the thirst for life again.

The meeting started with Kateryna Ostrovska’s welcoming speech. She is the Chairman of Board of the CIT Institute in Ukraine, as well as the Head of Special Education and Social Work Department in Ivan Franko National University. She said: “Today we have gathered here a quintessence of those Ukrainian specialists who could be interested in the field of CIT psychotherapy, not only to study and use it, but also spread their knowledge further. I am convinced that this experience will be very valuable for our country because the Concept of Integrated Techniques can help to deal not only with human injuries, but also with really breaking, acute crises in the future”

Olha Oliynyk, who is a psychologist, psychoanalyst, trainer, CIT Concept supervisor explained how the initiative of cooperation with the CIT Institute came about and described how the the project “Overcoming Injuries is Obtaining Resources for the Future” was created. “Of course, Ukrainians were not prepared for the war to break out in the East. We did not have the necessary expertise to deal with all possible mental injuries as effectively as possible. But Germany has such experience and we realised that they can share it with us,” reported Olha Oliynyk.

Ihor Pyrozhyk, a representative of Ukrainian diaspora in Germany, a member of the Ukrainian-German Society “Freie Ukraine Braunschweig” also addressed the meeting. The Society became one of the initiators and benefactors which helped Ukrainian specialists to get an opportunity to study at German CIT Institute. Ihor Pyrozhyk detailed the history behind the society, its activities, plans and ambitions. And he also wished everyone to be healthy, energetic and have an interesting discussion.

During the meeting, all the participants had an opportunity to watch a film in the format of interviews with representatives of the CIT Institute in Germany and Ukraine. In the film experts shared their views on the psychological state of Ukrainians that arose during the war in the East, analysed their own memories and emotions and produced ideas to stabilise the mental health of the society.

Кateryna Ostrovska also spoke about the psychotherapy, rehabilitation and vocational guidance technologies development for the participants of the Joint Forces Operation and Internally Displaced People, in particular, she illustrated her words with photographs and findings on the testing of the technology map for effective psychotherapy for Internally Displaced People and JFO participants.

During the event, the assistant professors of the Special Education and Social Work Department of Ivan Franko LNU Oleg Salomon and Lilia Drobit shared their impressions about their participation in a two-year project, studying CIT methods in Germany. Now, being experts and trainers, they are helping to train other specialists in Ukraine and spread the CIT psychotherapy skills.

At the end of the meeting, all those present were engaged in discussions, exchanges of ideas, views, experiences and the creation of new and relevant ideas in the field of psychotherapy.