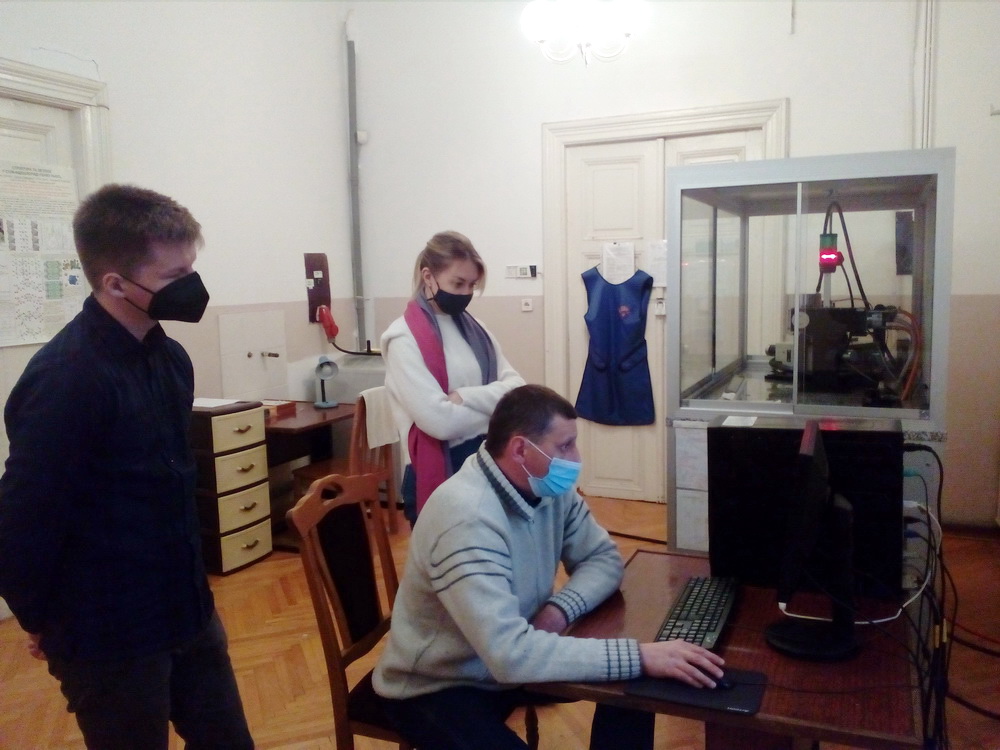 On 11-20th November, 2021, a group of scientists, namely: a researcher, Dr. Volodymyr Buturlim and postgraduate student Alexandra Koloskova from the Department of Solid State Physics of Charles University (Prague, the Czech Republic) visited the Department of Inorganic Chemistry of Ivan Franko National University of Lviv.

Longstanding partnership between scientists of Lviv University and Charles University traditionally deals with the study of the crystalline structure and physical character of intermetallide hydrides  which are important not only from the point of view of fundamental science for studying the peculiarities of interatomic interactions, but also are of applied interest as hydrogen accumulators, metal-hydride current sources and sensitive sensors. Since 2019, collaborative study has received financial assistance from the Ministry of Education and Science of Ukraine through a competition of Ukrainian-Czech co-projects as part of the Agreement between the Cabinet of Ministers of Ukraine and the Government of the Czech Republic on science and technology cooperation.

The key element of the cooperation is the mutually reinforcing partners’ know-hows, as the Lviv scientists’ strength is crystallochemical study, while the Prague ones’ is the study of physical characters. Experienced researchers, scientists with good experimental skills, as well as savants who have just started their career path (students and postgraduates) both from Ukraine and the Czech Republic are involved in the research.

In 2021 a collaboration on joint Ukrainian-Czech project “Hydrogenization of intermetallics: hydrogen storage and control of electronic properties” under the authority of Academician of the National Academy of Sciences of Ukraine, Professor Roman Gladyshevskii on the Ukrainian side and Associate Professor, Dr. Ladislav Havela on the Czech side went into action. The first stage of the study involved the synthesis and analysis of alloys, conducted during the visit of Czech colleagues to Lviv. The work was carried out together with the project realizers, Lviv University senior research associates Khrystyna Miliyanchuk and Yaroslav Tokaychuk in the laboratories of the Department of Inorganic Chemistry, Inter-faculty Research and Training Laboratory of X-ray Diffraction Analysis and Research Equipment Sharing Center “Material Science Laboratory of Intermetallids”

During the visit, the Czech scientists took a look at the Department of Inorganic Chemistry equipment of the Ivan Franko National University of Lviv and shared their experience of working on their own equipment. Based on the obtained results, the next stages of the project implementation, which will take place in both Lviv and Prague, were agreed upon and the process of scientific publications manuscripts preparation was coordinated.

Adapted from the Faculty of Chemistry information

University representatives adopted methods of organizing Teacher’s Certification Centers at Bayreuth University
INTERNATIONAL ROUND TABLE “Historical ethnomusicology on Jewish-Ukrainian and Jewish-Polish encounters before the 1840s” with participation of scholars from Ukraine, Israel, Poland