Home
News
Rector Volodymyr Melnyk has met with Tobias Tiberg, the Ambassador Extraordinary and Plenipotentiary of Sweden to Ukraine 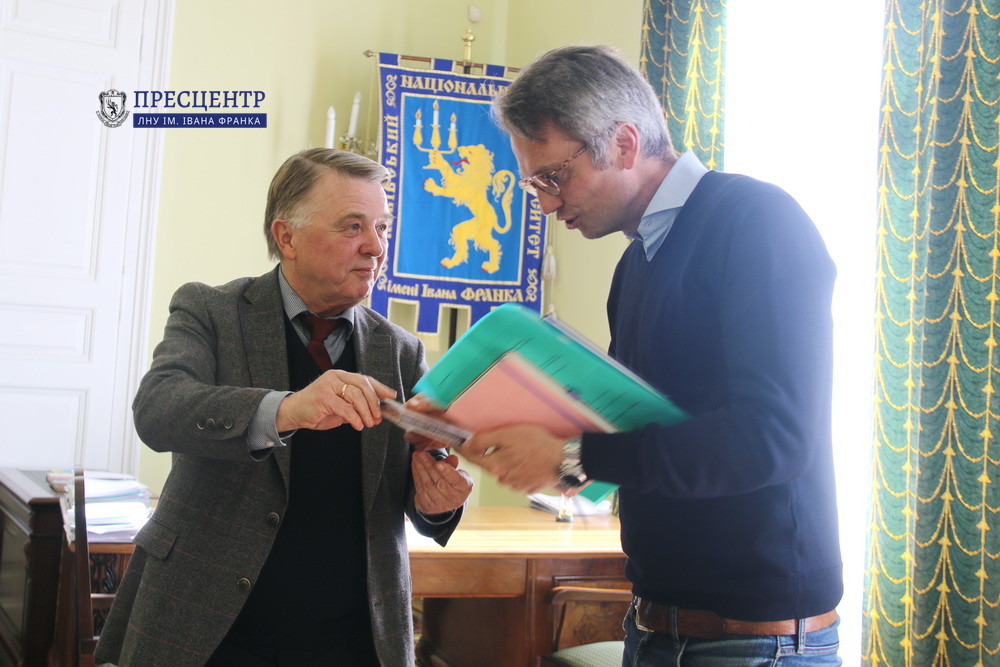 On April 13, 2022, Ivan Franko National University of Lviv was visited by Tobias Tiberg, the Ambassador Extraordinary and Plenipotentiary of Sweden to Ukraine. During the meeting at the University, the Swedish diplomat met with the Rector, Professor Volodymyr Melnyk, the Vice-Rector for Research, Education and International Cooperation Serhiy Riznyk, Head of the Northern European Countries Center Marianna Gladysh, and spoke to the students from the higher education institutions in Ukraine which had suffered from Russian aggression.

During the meeting, the Rector Volodymyr Melnyk and Swedish Ambassador Tobias Tiberg discussed how to continue the cooperation between Lviv University and Swedish educational, scientific and cultural institutions, as well as specific humanitarian initiatives aimed at overcoming the consequences of the Russian invasion of Ukraine.

Having welcomed the Swedish diplomat at the University of Lviv, Volodymyr Melnyk thanked for well-defined political and economic support for Ukraine in the fight against the Russian aggressor, which Sweden has been extending since February 24th. The rector pointed out that the full-scale Russian invasion of Ukraine made every Ukrainian understand who is Ukraine’s true reliable partner and loyal friend.

“It is crucial for us to understand that we are not alone in the fight against the Russian aggressor. And we are very pleased to see that Sweden has already declared its full support for Ukraine and is steadily trying to maintain its position, helping us in the fight against the Russian aggressor. Your country is proving that Sweden is always on the side of freedom and democracy!” Volodymyr Melnyk pointed out and explained in detail humanitarian initiatives implemented by the team of Lviv University since the beginning of a full-scale Russian invasion.

The Rector emphasized the fact that Lviv University has supported and hosted over 2,000 IDPs, most of them are students of higher education institutions located at the active combat zone.

Having thanked Lviv University for the opportunity to visit it Tobias Tiberg noted the importance of the help that the Ivan Franko University of Lviv has been providing during the process of managing the fallout from the Russian invasion of the territory of Ukraine.

“It is very important that you support students from other universities in Ukraine. We understand how important it is for Ukraine now to continue the studying and learning process, research, and restore the economy. I am convinced that the cooperation of your University with Swedish institutions will continue and will bring real benefits to Ukrainian society, “said Tobias Tiberg.

After the meeting with the University administrators, the Ambassador Extraordinary and Plenipotentiary of Sweden to Ukraine had a dialogue with the Lviv University students and young people from higher education institutions located in eastern Ukraine, who are currently studying at the University and living in its dormitories.

In particular, the students talked about how they moved from their cities to Lviv and the assistance provided by Lviv University with settlements and other needs.

Students of Lviv University also brought to the diplomat’s attention the initiatives aimed at helping IDPs and straightforwardly the Armed Forces of Ukraine. In addition, the university youth addressed the Ambassador Extraordinary and Plenipotentiary of Sweden to Ukraine with the request to assist in the student dormitory construction. According to the students, this issue is especially relevant in the context of assistance to internally displaced persons and an increase in the number of people willing to transfer to Lviv University.