Home
News
The University budget for 2021 has been approved 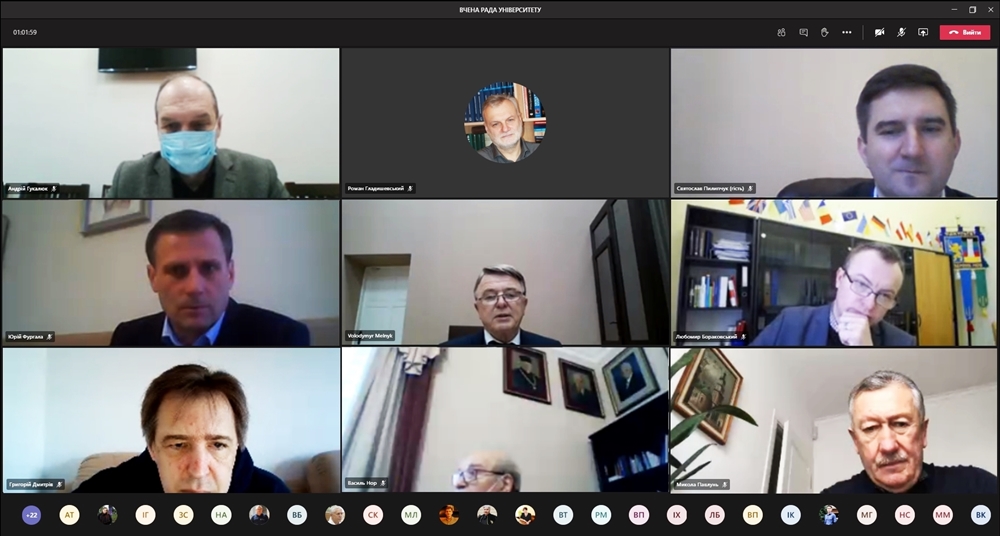 the Chief Accountant of the University Liubov Khmelnytska made a report about budget implementation in 2020. She familiarized her colleagues with the main items of expenditure, in particular, she emphasized on the financial implications of salaries, scholarships, utilities, etc. Payments.  Lyubov Khmelnytska paid special attention to the costs which were spent because of the quarantine and the fight against coronavirus disease, as these funds were not planned. The chief accountant stated that despite all the challenges, the University budget in 2020 was implemented.

The report was discussed by Yulian Beck, the head of the University’s Primary Trade Union, who stressed that “the 2020 budget was socially oriented.” The chairman of the trade union committee stressed that there were no delays in the payment of wages, all planned payments were made. Yulian Boguslavovych thanked the University administration for understanding and promptly responding to the challenges posed by the Covid-19 coronavirus pandemic. He also stated that the indicator for ensuring the social rights of workers in 2020 is the highest in the last few years.

The report was supported by the Head of the Criminal Procedure and Criminology Department, Chairman of the University Committee on Budget and Finance, Professor Vasyl Nor. Vasyl Tymofiiovych noted that the budget for 2020 has been completed in full, and, importantly, it has been completed at a very difficult time. He is convinced that all financial and economic support services in 2020 worked in harmony and the University functioned well.

By a unanimous decision, the members of the Academic Council approved the report on the University’s budget implementation in 2020.

The draft budget of the expenditures covered by the special fund for 2021 was presented by the head of the planning and finance department Svitlana Sas. Svitlana Petrivna analyzed in detail the budget items included in the budget establishment and all planned expenditures.

Yulian Beck, the head of the University’s Primary Trade Union made an appeal to his colleagues to support the draft budget stressing that “the project has been a success on public hearing, which was open and transparent.” The head also pointed out that about 80 percent of the funds included into the budget are intended to be used for social needs. Yulian Beck also stated that “all the University Collective Agreement provisions have been taken into account when developing the draft budget.”

Roman Hladyshevsky, Vice-Rector for Research, Corresponding Member of the National Academy of Sciences of Ukraine, joined the discussion emphasizing that “the draft budget is deficit-free and is strategically congruent with the University Development Strategy.” Roman Yevhenovych noted that there are some positive things such as funds which are planned to support the Botanical Garden, the Astronomical Observatory, the Scientific Library of the University.In addition, the Vice-Rector praised the investment in supporting professional publications, purchasing high-technology equipment and supporting training laboratories, which allows to work on the innovative development of the University.

The Rector of the University, Corresponding Member of the National Academy of Sciences of Ukraine, Professor Volodymyr Melnyk thanked his colleagues for discussing and critically analyzing the draft budget, emphasizing the need to implement the University’s priorities in 2021. Volodymyr Petrovych also added that it is worth working on improving the system of employee motivation. At the same time, according to the Rector, special attention should be paid to the development of fundraising, finding additional sources of funding, in particular to the support of projects and grants.

Taking the opportunity, Volodymyr Petrovych congratulated his colleagues on the upcoming holidays, wished everyone good health and “firm confidence that we are all doing extremely important work together.” The Rector stressed that “the University confidently withstands all challenges, because the team is aware of the responsibility and understands the role of the University in not only an individual young person’s life, but Ukraine as a whole.”

Yana Havryshko, a student of the Faculty of Journalism, is the winner of the All-Ukrainian Shakespearean Competition
The quarantine regime at the University has been extended until February 28, 2021