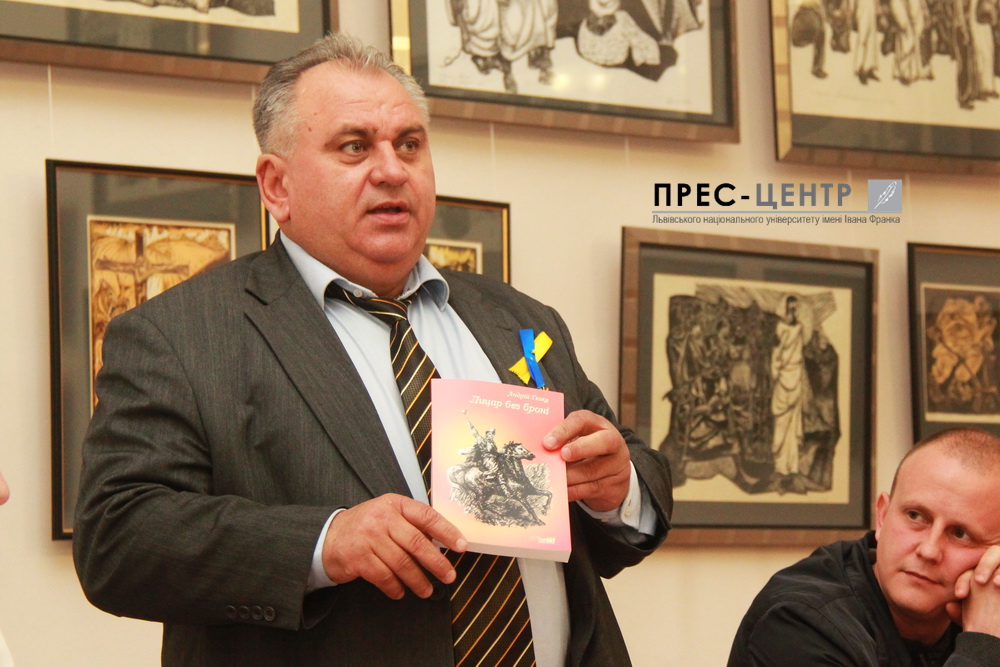 26 April 2016, on the occasion of the World Day of the book and copyright at the Faculty of Philology at Lviv University students and teachers met Andrey Hevko, a Slovenian writer who has Ukrainian origin.

“Slovenians know little about Ukraine, including its language and culture, as well as Ukrainians about Slovenia. Most Slovenians are not aware of the fact that we share a common Austro-Hungarian history. However, today the intercultural relations between our countries significantly revived “- highlighted the assistant of the Department of the Slavic Philology, the teacher of the Slovenian language Primoz Lubei.

The writer Andrew Hevko is a kind of mediator in the cultural sphere between Ukraine and Slovenia. “The main task now is to present Ukraine on the world stage in true light as Ukraine is often identified with Russia. So we need to change these stereotypes, “- he said.

Talking about his origin, Andrew Hevko said that he is very proud of his Ukrainian roots. “Everything you have and any event that takes place here is close to me, so I always worry about Ukraine and try to help it in any way” – added the writer.

During the meeting with representatives of the academic community of the University Andrij Hevko presented his book “Knight without Armor,” “100 Best Ukrainian Songs” and “Top 10 Ukrainian fairy tales” (translated in Slovenia) and Slovenian-Ukrainian phrasebook “Two Colors”.

The peculiar feature of the edition “Knight without Armor” lies in the stories about people mentioned in poetry. “This book I dedicated to all women. All of us ought to understand how important a woman is in any man’s life “, – said Andrey Hevko. In addition, the book also contains   poems by great Ukrainian poet Taras Shevchenko and other world classics.

According to the writer, a great achievement in cross-cultural relations between Ukraine and Slovenia became the Slovenian songwriter “100 Best Ukrainian songs» published at the end of 2010.

The writer spoke about another book, which he published in collaboration with the Association of Ukrainian “Karpaty” in Slovenia – Taras Shevchenko’s “Kobzar” which was translated into Slovenian in 1907 by a Slovenian writer and clergyman Joseph Abraham. The translation was released in two small pamphlets “Kobzar” and “Gaidamaky.”

“It is an interesting fact that there are only a few copies of this publication in Slovenia, so I could not get any, hence I had to read it in the library. However, I was able to take a picture of each page. At home I rewrote every page. Hence, we published a facsimile edition of “Kobzar”, – said Andrij Hevko.

Slovenian writer also spoke about the need for lexicographical publications and work at Ukrainian-Slovenian phrasebooks, and reference guide “Two Colors” (2008).

“Knowing about the lack of translated Ukrainian-Slovenian dictionaries, I decided to fill this gap. The book “Two Colors” is intended primarily for Ukraine and Ukrainian citizens residing in Slovenia or come here. Phrasebook includes useful tourist information about Slovenia and historical character of the country, information about ancient and modern Ukrainian-Slovenian cultural ties “, – said Andrij Hevko.

Members of the literary circle “Dyvoslovo” under the direction of Christina Voloschak recited passages from the book Andrew Hevko “Knight Without Armor”. Songs  “Hutsulka Ksenia” and “My Dear Mother” translated into Slovenian were performed by the choir of bandura players “Zoryanytsa” (Head – Zynovija Sychak ).

The event was organized by the Faculty of Philology, literature department of Ukrainian diaspora named after Peter Goya and the University Department of Slavic Studies. Lviv University student from Croatia, Davor Lahudza is the moderator of the meeting.