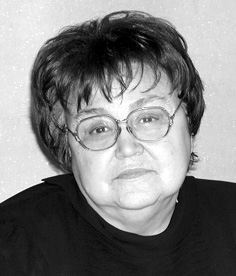 BODAK Oksana Ivaninva (2 May 1942, the village of Pomoriany, Zolochiv Raion, Lviv Oblast – 25 October 2005, Lviv) – an inorganic chemist, Candidate of Chemical Studies (Research of ternary systems Ce– (Fe, Co, Ni) –Si and their analogues (phase equilibria, crystal structure and physical properties), 1970), Associate Professor (1975), Doctor of Chemistry (Interaction of rare earth metals in ternary systems, 1984), Professor (1984). She graduated from the Faculty of Chemistry of the Ivan Franko National University of Lviv (1964). She was engaged as a Laboratory Assistant, then Senior Laboratory Assistant in 1964-65, an Assistant Professor in 1965-75, an Associate Professor in 1975-80, a Senior Scientific Collaborator in 1980-84, a Professor in 1984-89, a Chairperson of the Department of Inorganic Chemistry of the Ivan Franko National University of Lviv in 1989-2005. In 1967-68 she completed a scientific internship at Wrocław University of Science and Technology and Institute of Low Temperature and Structure Research under the supervision of the Polish Academy of Sciences President Professor Włodzimierz Trzebiatowski.

She was the head of Lviv Scientific School on Crystal Chemistry (1995-2005) and the head of the Section of Chemistry at the Western Scientific Center of NASU, as well as a member of the Expert Council on Inorganic Chemistry of the Higher Attestation Commission of the USSR (1987–90) and the Expert Council on Chemistry of the Higher Attestation Commission of Ukraine (1998–2002). She was a member of the International Crystallography Union, International Center for Diffraction Data, representative of Ukraine in the European Crystallographic Association; member of the editorial board of the Visnyk of the Lviv University. Series Chemistry; co-editor of the international magazine Red Book; organizer and member of the organizing committees of international scientific conferences, seminars and schools. Oksana Bodak was awarded Lenin Komsomol Prize (1976); State Prize of the USSR in the field of science and technology (1984). Soros Professor (1997); Honored Professor of Lviv University (2001) and “Man of the Year” by the American Biographical Institute (2000).